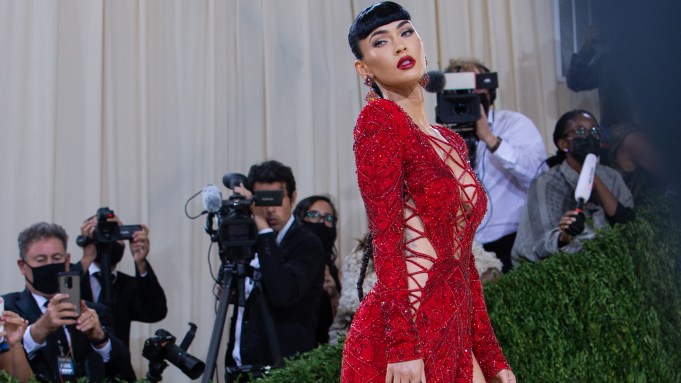 Megan Fox, who has emerged as one of the breakout style stars in the last year, turns 36 today.

With the help of famed stylist Maeve Reilly, the actress has stunned in unique and memorable outfits of late, wearing designs by Mugler, Peter Dundas, David Koma, Alex Perry, Mach & Mach and more, cementing herself as a force to be reckoned with when it comes to street and red carpet style.

Her grasp on fashion seemingly emerged when the actress started dating musician Machine Gun Kelly, born Colson Baker, who is now her fiancé. The two were first romantically linked in June 2020 and by November that year, Machine Gun Kelly had introduced her to Reilly, who offered to help style Fox.

From there, Reilly described it to WWD as “love it at first sight,” as the two continued to work well together, playing off Fox’s ability to pull off certain outfits as well as complementing the musician’s punk and rock ‘n’ roll style when they walk red carpets and attend events together.

Notably, some of Fox’s looks have sent her fans into frenzies on social media, going viral for her custom naked Mugler dress at the 2021 VMAs and her Barbie-inspired, bright pink Mach & Mach jumpsuit at the 2021 iHeart Radio Music Awards.

“She’s having this completely new experience, dating [Machine Gun Kelly] and having these movies coming out. It’s just a different time for her. I think before she was kind of hiding and now we’re naked at the VMAs,” Reilly told WWD in October. “We couldn’t be more polar opposite from where she was a year ago.

Throughout her career, Fox was mostly known for her appearances in action movies such as the “Transformers” franchise and the “Teenage Mutant Ninja Turtles” franchise, as well as the now-cult classic film “Jennifer’s Body.”

Click the gallery above to see some of Megan Fox’s most stylish moments.

Megan Fox and Machine Gun Kelly Are Engaged: A Look at Their Couple Style