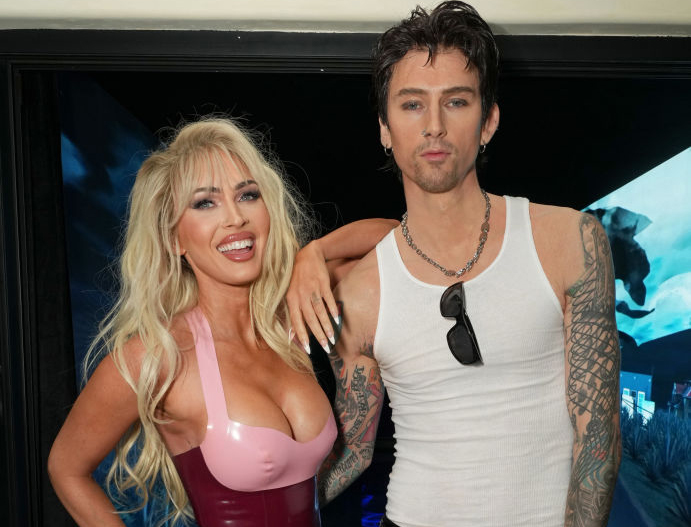 In celebration of the tequila brand’s soiree, the actress and rock star were inspired by their ’90s counterparts, Anderson and Lee, whose relationship was documented earlier this year in the Hulu television series “Pam & Tommy.”

For her look, Fox wore a low-cut, formfitting latex burgundy minidress with pink bra cups. She coordinated the look with a pair of PVC platform heels.

She sported a blond wig reminiscent of Anderson’s signature bleach-blonde style with bangs in the front and flowing, fresh-out-of-bed waves in the back. For makeup, she went for a dramatic look with a glossy rose lip, heavy blush and smokey eye shadow with wingtip eyeliner and eye-popping mascara. She had her nails done in statement French tips.

Machine Gun Kelly had a charcoal black hairpiece and had his facial hair shaved into a goatee to mimic Lee’s aesthetic. For his outfit, the musician wore a white tank top, black leather pants, a double grommet lined belt and a pair of black lace-up boots. He accessorized with sunglasses clipped to the neckline of his tank top, a silver chainlink necklace, several rings and a cigarette used as a prop.

In addition to celebrating Halloween festivities, Machine Gun Kelly is also in the middle of promoting his new film “Taurus.” The actor recently appeared at the San Diego Film Festival in a bright blue suit as part of the promotional tour for the film, which he cowrote with Tim Sutton.