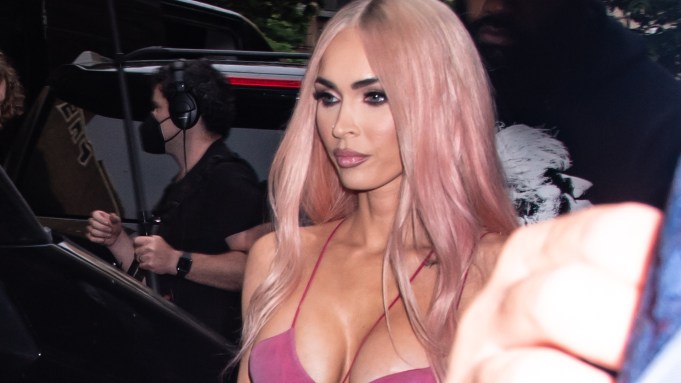 Megan Fox went all-pink for her appearance at the “Machine Gun Kelly’s Life in Pink” premiere.

On Monday night, Fox attended the premiere of her fiancé’s documentary wearing a pink two-toned minidress by Nensi Dojaka paired with matching pink strappy heels by Femme, which complemented her new light pink hair. She was styled by Maeve Reilly, with hair done by Dimitris Giannetos and makeup by Clarissa Luna.

Fox, who is originally a dark brunette, and Machine Gun Kelly walked the red carpet in matching pink ensembles, with the rapper wearing a light blue and pink mock neck crop top with white pants that featured chains, showing off his midriff covered in tattoos. The artist, born Colson Baker, also had his hair dyed pink by Giannetos for the night. He was styled by Adam Ballheim.

The premiere was held in New York City at the exclusive private club Zero Bond in the NoHo neighborhood.

“Machine Gun Kelly’s Life in Pink,” which is now available to stream on Hulu, chronicles the artist’s life, providing an intimate look at Machine Gun Kelly’s career, while he also confronts the highs and lows of his personal life, revealing that he attempted suicide following the death of his father in 2020. The musician’s film also follows how he handles fame, his role as a father to his 12-year-old daughter Casie, and more.

The couple, who were first romantically linked in May 2020, became engaged in January. Since their red carpet debut together last year, the two have taken couples’ styling to another level, with their stylists Reilly and Ballheim working in tow to ensure both Fox and Machine Gun Kelly always complement each other’s style.

Click to See Megan Fox’s Style Evolution Through the Years