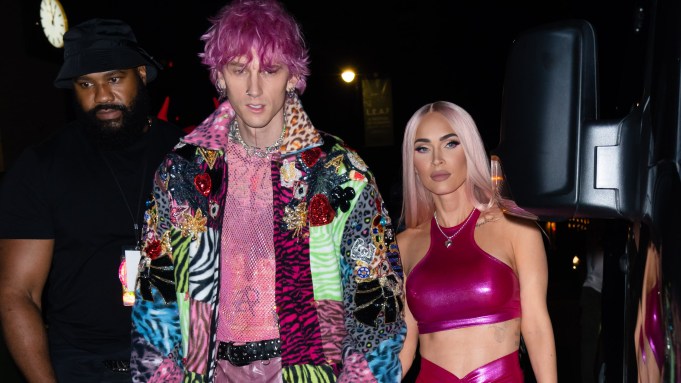 Megan Fox is continuing her streak of all-pink outfits.

Attending the after party for her fiancé Machine Gun Kelly’s Madison Square Garden concert Tuesday, the actress wore a fuchsia racerback crop top and ruched midi skirt by The Andamane, paired with pink heels by Femme and a matching minibag by L’alingi. She was styled by Maeve Reilly.

That night, Kelly also continued to match with Fox in another all-pink outfit, wearing baby pink trousers and a pink mesh tank under an oversize colorful jacket with patchwork detailing.

Earlier this week, the couple attended the premiere of Machine Gun Kelly’s Hulu documentary “Life in Pink,” which was held at the exclusive private club Zero Bond in the NoHo neighborhood of Manhattan.

Fox and Machine Gun Kelly, born Colson Baker, also matched in all-pink at the premiere. Fox wore a two-toned minidress by Nensi Dojaka and matching pink heels by Femme, while the rapper wore a light blue and pink mock neck crop top with white pants that featured chains, showing off his tattoo-covered midriff.

“Machine Gun Kelly’s Life in Pink,” which is now available to stream on Hulu, chronicles the artist’s life, providing an intimate look at his career and the highs and lows of his personal life. The musician’s film also follows how he handles fame, his role as a father and more.