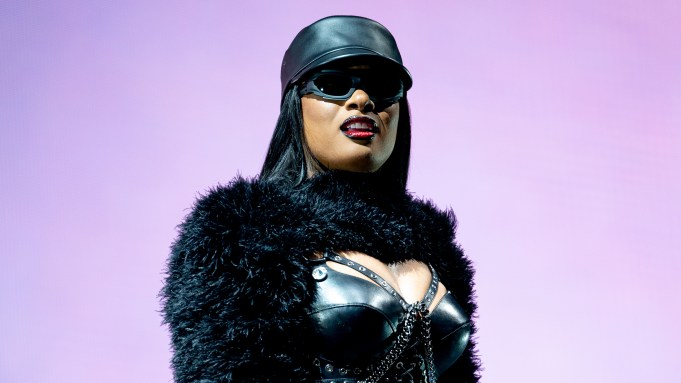 Megan Thee Stallion made her Glastonbury Festival debut in a high-fashion look.

shout out to dua lipa, we love you girl 🥰 #glastonbury #glastonburyfestival #megantheestallion #dualipa

“@glastofest was absolutely legendary last night,” the musician wrote on Instagram on Sunday, sharing photos of herself performing and posing in the look. “Thank you, thank you U.K. hotties, we really had a f—ing blast. Big thank you to @riccardotisci17 and the whole @burberry team for my head-to-toe custom look.”

Tisci also shared photos of Megan Thee Stallion on his Instagram with the caption: “@theestallion showed Glastonbury what a real hot girl summer looks like.”

As the U.K.’s Glastonbury Festival — which is held in Somerset, England — took place following the U.S. Supreme Court’s overturning of Roe v. Wade, effectively eliminating the constitutional right to an abortion after nearly 50 years, Megan Thee Stallion spoke out about the ruling while on stage.

“You know it wouldn’t be me if I didn’t take a second to call out these stupid ass men,” the musician said on stage referencing the Supreme Court justices who voted for the overturning. “Texas really embarrassing me right now, y’all. The hot girls and hot boys do not support this s—t. My body, my m—ing choice.”

She then encouraged the crowd to join her in chanting, “My body, my m—ing choice.”

Megan Thee Stallion wasn’t the only musician at Glastonbury Festival to speak out about the Supreme Court’s ruling. Olivia Rodrigo also shared her outrage on stage, calling out the justices who voted to overturn the ruling. Rodrigo also brought on stage musician Lily Allen, who sang her hit song “F—k You,” also in reaction to the Supreme Court ruling.

The Standout Fashion Moments From the BET Awards 2022 Red Carpet