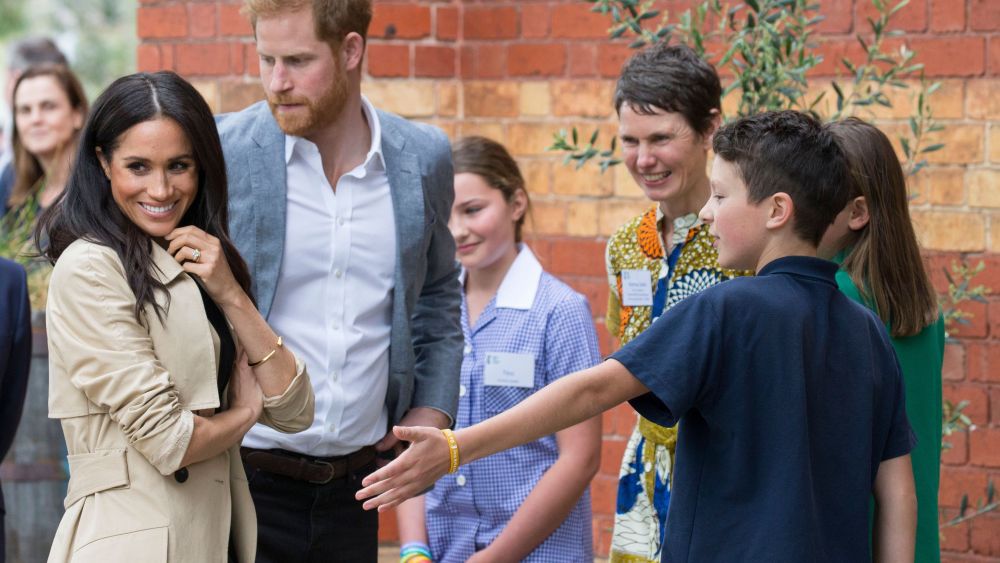 SYDNEY — At the halfway point of the Duke and Duchess of Sussex’s 16-day tour of Australia, New Zealand and the Pacific, the duchess momentarily hit the pause button — leaving Prince Harry to fly solo for several engagements on Sunday and Monday, citing his wife’s fatigue as she juggles their hectic schedule with the first trimester of her pregnancy.

The duchess isn’t the only one catching her breath.

A number of Australian designers are still reeling from the “Meghan effect,” after she showcased as many as five local labels in her tour wardrobe last week, alongside international brands such as Brandon Maxwell, Jason Wu, Roksanda Ilincic, Stuart Weitzman, Manolo Blahnik, Gucci and Birks.

On Saturday, the duchess wore a black coat dress by London-based New Zealander Emilia Wickstead, to lay a wreath at the ANZAC Memorial in Hyde Park. She then changed into a white Altuzarra jacket, black Mother Denim jeans and black Invictus Games-branded shirt, to watch the first competition of Prince Harry’s international sporting competition — in which 500 injured military veterans from 18 countries will compete this week in Sydney.

For the Games opening ceremony on Saturday evening, she changed into a navy Stella McCartney dress and matching coat by Gillian Anderson for Winser London.

For the preceding four days, the duchess wore Australian brands every day, starting with Sydney designer Karen Gee’s ivory crepe “Blessed” sheath dress for her first engagement at Admiralty House — interest in the brand crashed Gee’s web site multiple times over the course of the next two days.

The dress was teamed with a beige trenchcoat designed by Paris-based Australian Martin Grant, which was worn again on Thursday.

Then on Friday, the duchess wore Grant’s striped maxidress on Bondi Beach. The garments had been custom-tweaked from two pieces in Grant’s resort 2019 collection. At least 10 international buyers have since upped their orders as a result of the publicity, according to Grant.

Dion Lee custom-made the navy merino “Folded Sail Dress” that was worn in Melbourne on Thursday.

After an instant media blitz, which caused his web site to crash, Lee decided to add the dress to his resort 2019 collection and make it available for pre-order later that day. In 24 hours, he sold more than 250 units of the 1,290 Australian dollars, or $918 dress, he told WWD, with his team still responding to some 600 inquiries by press time.

“When you realize the impact these things have and the volume of people who reach out to you and actually see this, it’s quite incredible,” Lee said.

Brands with an ethical or sustainable focus have been prominent, including flats by San Francisco brand Rothy’s, which are made from recycled plastic bottles, and white sneakers from French ethical brand Veja, worn to watch sailing events on Sydney Harbour on Sunday.

To meet with drought-stricken farmers in Dubbo, the duchess teamed a Serena Williams jacket, Maison Kitsuné shirt, J. Crew boots and diamond-stud earrings and a monogram necklace from Sydney’s Natalie Marie Jewellery, with black skinny jeans by Queensland-based, B Corp.-certified Outland Denim. The latter’s garments are made by Cambodian women who have been rescued from human trafficking and sexual exploitation.According to Outland Denim cofounder Erica Bartle, the company experienced a 1,000 percent spike in web site traffic in the first 48 hours, with an ongoing 375 percent increase in daily sales across the site. The surge in demand has resulted in the employment of at least 15 new seamstresses in Cambodia, she said.

Noted Bartle, of the duchess: “She is like a magical fashion unicorn.”