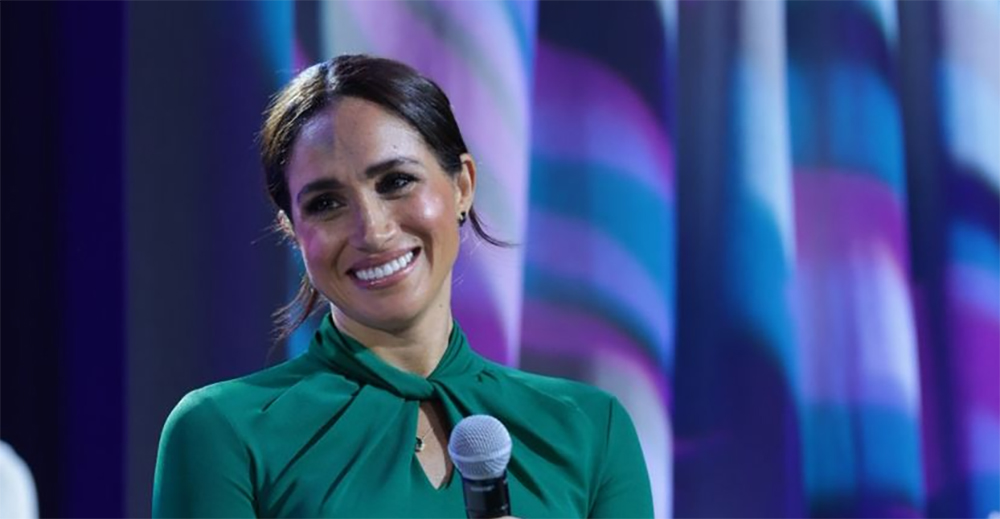 Meghan Markle graced a women’s empowerment event in Indianapolis, Indiana, on Tuesday in a green look. For the event, titled, “The Power of Women: An Evening With Meghan, The Duchess of Sussex,” she wore a Giorgio Armani dress.

The brand’s jersey midi dress featured a twisted keyhole design on the front and a mock neckline. To tie together her outfit, Markle wore a pair of Manolo Blahnik BB pumps in a violet color.

For accessories, the duchess went with some of her most frequently worn jewelry by Logan Hollowell, wearing the Baby Queen Water Drop Emerald Solitaire Necklace, which encapsulates a pear-shaped Zambian emerald.

Her hair was styled into a low bun, with a shell bang on each side. Markle wore a bright rosy blush as well as a glossy rose lip.

The event, in which the duchess was the special guest, was moderated by Rabbi Sandy Sasso, the first woman rabbi ordained by the Reconstructionist movement. While at the speaking engagement, Markle talked about the importance of supporting young girls.

This is Markle‘s latest public appearance. In March 2020, her and husband Prince Harry exited from their roles as senior members in the British royal family. The couple has since moved to California and continue to pursue multiple media ventures.

On Wednesday, popular streaming service Netflix posted a clip to its social media accounts stating a new documentary, titled “Harry & Meghan,” will soon be releasing on the platform. The short trailer comes after Prince Harry & Meghan signed a multiyear deal with Netflix in 2020. On Tuesday, Markle concluded the first season of her Spotify podcast, “Archetypes With Meghan.”