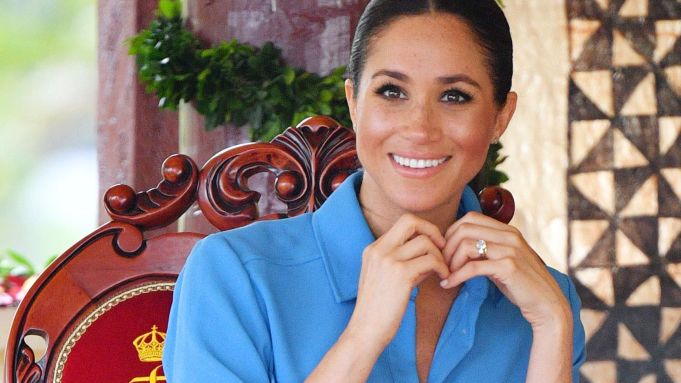 Since announcing her pregnancy in October, Meghan Markle, the Duchess of Sussex, has parlayed her new royal style into regal maternity style. From royal tours in Australia and Fiji — and most recently Morocco — the Duchess has evolved her look wearing both American and Canadian designers, as well as British fashion brands throughout her pregnancy.

Kicking off her pregnancy with a tour of Australia, Fiji, New Zealand and Tonga with Prince Harry in November 2018, the world — not to mention social media, which has birthed a slew of fan accounts dedicated to all-things Meghan style — tuned in to see how the Duchess of Sussex would dress her burgeoning baby bump. The world tour saw Markle opting for classic pieces, like a Martin Grant beige trenchcoat and knee-length A-line dresses from brands like Club Monaco, Karen Gee and Brandon Maxwell.

Markle has stayed on the simpler side when it comes to her style, choosing pattern-less frocks primarily in neutrals and blue tones. The Duchess has experimented with more subdued prints, like a green and white striped Martin Grant dress in Australia and a red and purple floral print maxi dress by Figue in Fiji.

The Duchess has also worn a number of custom looks during her pregnancy from brands such as Dior, Carolina Herrera and Givenchy’s Clare Waight Keller, who famously designed Markle’s wedding dress. For example, on Markle’s tour of Morocco the Duchess wore two custom looks, first on Day Two of the tour in a Dior beige dress and matching cape and on Day Three in a Carolina Herrera printed blue maxidress.

With only a few more royal engagements scheduled before the royal baby’s entrance into the world, expect Markle to deliver some more classic maternity looks.

Click through the above gallery to see more of Meghan Markle’s best maternity looks.