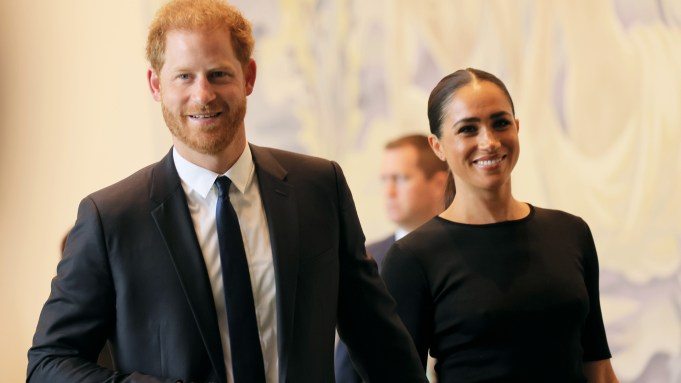 Prince Harry and Meghan Markle have made their return to New York City.

The Duke and Duchess of Sussex made an appearance on Monday at the U.N. General Assembly for a special event that honors the late South African president Nelson Mandela. Prince Harry will give a keynote speech during the assembly. The couple is also set to meet with U.N. ambassadors during their visit.

The royal couple arrived at the U.N. hand-in-hand, with Markle wearing a simple black dress and Prince Harry matching in a classic black suit.

Prior to stepping away from their royal duties, Prince Harry and Markle embarked on a royal tour of South Africa in 2019 where they met with the late archbishop Desmond Tutu and visited various organizations that work to provide education, housing and health care, among others. During their visit, the couple also met with Mandela’s widow, Graca Machel.

This is Prince Harry and Markle’s third joint trip to New York City since stepping away from their royal duties. In September, the couple made their way to the city to participate in the Global Citizen Live event, which raised money and awareness for global COVID-19 vaccine equity. Then in November, the couple returned to make an appearance at the Intrepid Museum’s Salute to Freedom Gala, which honored military veterans and raised funds for the museum’s educational programs.

PHOTOS: Click for more on Prince Harry and Meghan Markle’s appearance at the U.N. General Assembly in New York.