Prince Harry and Meghan Markle’s Oprah Winfrey interview has been drawing comparisons to the late princess’ landmark 1995 interview after she separated from Prince Charles. 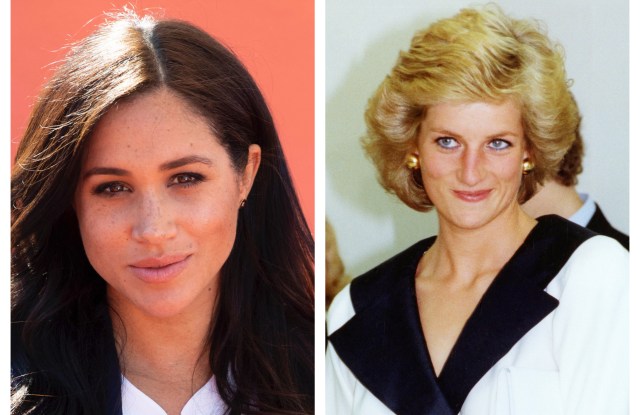 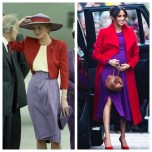 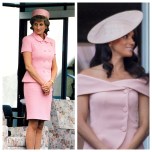 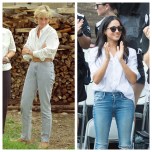 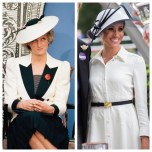 Prince Harry and Meghan Markle’s tell-all interview with Oprah Winfrey has caused a major stir since it made its debut Sunday night, as the couple dropped several bombshells that gave insight into their decision to step away from the royal family last year.

Many critics, outlets and royal historians have compared the pivotal interview to that of Princess Diana’s 1995 interview with Martin Bashir, which took place roughly three years after she separated from Prince Charles. Despite the interviews taking place 26 years apart, many have noted the similarities between the treatment both royal women experienced by the palace and the stresses royal life placed on their mental health.

The princess’ interview included several major revelations (most famously, her quote of “there were three of us in this marriage” in regard to Charles’ relationship with Camilla Parker Bowles) and insight into her struggles with depression and bulimia throughout her marriage. Prince Harry and Markle’s interview, too, offered several alarming revelations that led to their decision to step away, including the palace’s “concerns and conversations about how dark [their son Archie’s] skin might be when he’s born” and Markle’s suicidal thoughts while pregnant with Archie.

One of the biggest bombshells to come from Markle’s interview was that she revealed she had suicidal thoughts and dealt with depression while pregnant with Archie.

“I was really ashamed to say it at the time, and ashamed to have to admit to Harry especially because I know how much loss he’s suffered,” Markle said, “but I knew if I didn’t say it that I would do it and I just didn’t want to be alive anymore. That was a very clear and real and frightening constant thought.”

Princess Diana spoke about her postpartum depression during her interview, stating: “I was unwell with postnatal depression, which no one ever discusses. In itself it was a bit of a difficult time. You’d wake up in the morning feeling you didn’t want to get out of bed. You felt misunderstood and just very, very low in yourself.”

She said her depression affected her marriage and the way the family saw her. “It gave everybody a wonderful new label — Diana’s unstable and Diana’s mentally unbalanced,” she said. “And unfortunately, that seems to have stuck on and off over the years.”

The princess also revealed that she had harmed herself while she was depressed (“I just hurt my arms and legs,” she said) and dealt with bulimia for several years.

2. Both Women Asked the Palace for Help With Their Mental Health

Markle revealed that when she was having suicidal thoughts, she went to “the institution” — one of the ways she described different facets of the royal family — and asked for help. She was declined any assistance, stating they told her “it wouldn’t be good for the institution” if she received treatment.

Unlike her daughter-in-law, Princess Diana did receive treatment for her depression and self-harm. “I received a great deal of treatment,” she said, “but I knew in myself that actually what I needed was space and time to adapt to all the different roles that had come my way. I knew I could do it, but I needed people to be patient and give me the space to do it.”

Princess Diana said that her depression and treatment was not met well by the royal family.

“Well maybe I was the first person ever to be in the family who ever had a depression or was ever openly tearful,” she said. “And obviously that was daunting because if you’ve never seen it before how do you support it?”

3. Meghan Markle and Princess Diana Struggled With the Negative Press

Prince Harry and Markle used their interview to call out the intense scrutiny by the U.K. tabloids and how much of the criticism stemmed from racism toward Markle.

“For the family, they very much have this mentality of this is just how it is,” Prince Harry said. “That’s how it’s meant to be. You can’t change it. What was different for me was the race element because now it wasn’t just about her, but it was about what she represents. Therefore, it wasn’t just affecting my wife, it was affecting so many other people.”

Princess Diana also spoke to the intense media coverage that surrounded her since she started dating Prince Charles and the impact it had on her marriage.

4. They Both Expected Protection From the Royal Family

One of Markle’s earliest revelations in her interview with Winfrey was that she was told she would receive protection from the palace against negative tabloids, but ultimately saw this was not the case.

Markle came to this realization roughly six months after her royal wedding when the tabloids starting circulating a false story that she made her sister-in-law, Kate Middleton, cry over Princess Charlotte’s flower girl dress. Markle stated during the tell-all interview that this did not happen, but rather it was Middleton that made her cry over the matter. She said that the palace’s communications team would not correct or squash this story in the press.

“Everyone from my world was given the clear directive from the moment Harry and I were dating to say ‘no comment,’” Markle said. “We did anything they told me to do. Of course, I did because it was also both through the lens of ‘we’ll protect you.’ I believed that and I think that was really hard to reconcile because it was only once we were married and everything started to really worsen that I came to understand that not only was I not being protected, but that they were willing to lie to protect other members of the family and they weren’t willing to tell the truth and protect me and my husband.”

During Princess Diana’s interview, she too spoke out about the lack of protection she received from the palace, even confirming to Bashir that she believed the palace had “waged a war” against her after her separation from Prince Charles.

“I was the separated wife of the Prince of Wales,” Princess Diana said. “I was a problem, full stop. Never happened before, what do we do with her? She won’t go quietly. That’s the problem.”

5. Both Stepped Away From the Royal Family Due to Lack of Support

Both Prince Harry and Markle confirmed the lack of support from the palace and the royal family against the negative press influenced their decision to step away from their royal duties.

Princess Diana shared a similar sentiment during her interview, stating that the pressures from the media were taking a huge toll on her throughout her marriage.

“The pressure was intolerable then, and my job, my work was being affected,” she said. “I wanted to give 110 percent to my work and I could only give 50. I was constantly tired, exhausted, because the pressure was just, it was so cruel.”

In one of the viral moments from Markle’s interview, Markle talked about how she felt the palace was impeding her ability to speak out on issues that were important to her, such as women’s rights.

“I’ve always been outspoken, especially about women’s rights,” she said. “That’s the sad irony about the last four years is that I’ve advocated for so long for women to use their voice and then I was silent.”

Winfrey followed up by asking Markle if she was silent or silenced, to which Markle responded with “the latter.”

Princess Diana also spoke about how the palace wasn’t a fan of her public outreach, stating she thinks the royal family was upset with her “because I do things differently. Because I don’t go by a rule book, because I lead from the heart, not the head. Albeit, that’s got me into trouble in my work, I understand that, but someone’s got to go out there and love people and show it.”

7. Both Women Weren’t Trained for Their Royal Roles

Markle said growing up, she had little knowledge of the British royal family or royal life and came into her relationship with Prince Harry “naively.” She said she never researched her husband because “I just didn’t feel a need to because everything that I needed to know he was sharing with me.”

“I didn’t fully understand what the job was,” Markle said about joining the royal family. “What does it mean to be a working royal? What do you do? I knew that he and I were very aligned on all of our cause-driven work. That was part of our initial connection in what we talked about in the beginning of our courtship, but I think there was no way to understand what the day-to-day was going to be like.”

Princess Diana also stated she wasn’t prepared by the royal family once she married Prince Charles or knew what her role within the family was supposed to entail.

“No one sat me down with a piece of paper and said, ‘this is what is expected of you,’” she said. “But there again, I’m lucky enough in the fact that I have found my role, and I’m very conscious of it.”