After a series of meetings and a joint press conference with British Prime Minister Theresa May, President Trump and the First Lady hosted a dinner in honor of Prince Charles and Camilla, the Duchess of Cornwall.

LONDON — As the Trumps’ state visit in the U.K. nears the end of its second day, the First Couple welcomed Prince Charles and Camilla, the Duchess of Cornwall, to a real meat-and-potatoes meal at Winfield House.

Until tonight, politics and to some degree posturing overpowered the pageantry on Tuesday. After a breakfast for leading British and American business leaders at St. James’s Palace, the Trumps were off to 10 Downing Street. A bilateral meeting with outgoing Prime Minister Theresa May was followed by a joint press conference with both leaders appearing harmonious. The Q&A portion of the event led to talk of Trump’s 20-minute phone call with Boris Johnson, deportations, immigration, protests and Brexit. European Parliament member Nigel Farage arrived afterward for a meeting with the President.

Winfield House is home to the U.S. ambassador to the U.K., Woody Johnson. He and his wife, Suzanne, are friendly with the First Couple. FLOTUS reportedly was very involved with the planning of Tuesday night’s black-tie affair. The Duchess of Cornwall — whose much-memed wink during yesterday’s tea at Clarence House is all over social media — kept the white trend going in a satin-trimmed V-neck dress. Ivanka Trump donned a one-shoulder gown in white – the the predominant color for several of the high-profile female women this week.

Earlier in the day, she wore a beige flounced Celine coat dress accessorized with a black crocodile Birkin bag for a garden party at 10 Downing Street. 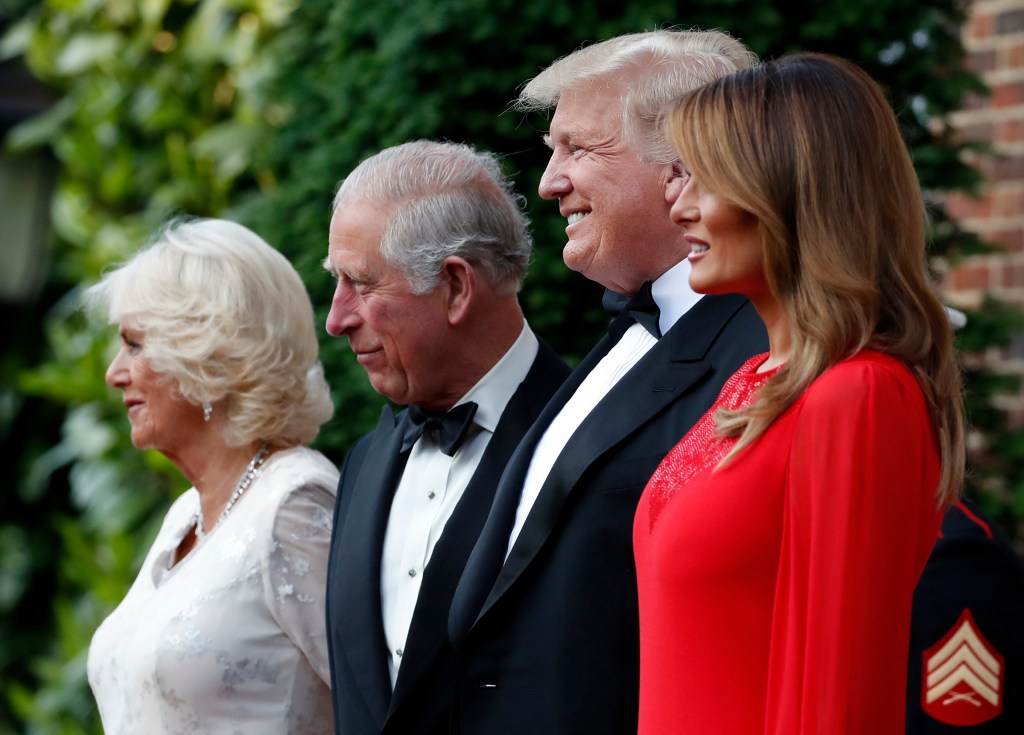 President Donald Trump and first lady Melania Trump pose for a photograph with Prince Charles, and Camilla, Duchess of Cornwall, before a reception at the U.S. ambassador’s residence, Winfield House, in London.  Alex Brandon/AP/Shutterstock

Last spring, the First Lady also went with Givenchy cape with a duchess satin lapel for a Mt. Vernon dinner in honor of French President Emmanuel Macron and his wife Brigitte.

Her style choices during this week’s visit to London aren’t the only ones being scrutinized by the media. The President’s four adult children are also getting the once-over online, and off. They were in the crowd at Tuesday’s press conference with British Prime Minister Theresa May. After participating in some of the bilateral meetings, Ivanka Trump, who with her husband Jared Kushner, is a member of the official U.S. delegation, walked to her seat with U.S. National Security Advisor John Bolton. As a gesture to the host nation, the First Daughter wore a white-and-black Burberry dress with polka dots. She joined her brothers Donald Jr. and Eric, who were suited up, and Eric’s wife Lara, who wore a red and white patterned dress. Tiffany Trump also turned up in white at 10 Downing Street.

Once the Trumps call it a night, they will have reason to catch some shut-eye before tomorrow’s ceremonies commemorating the 75th anniversary of D-Day. The Trumps will be up-and-out early to accompany the Queen and Prince Charles to an official D-Day event in Portsmouth. There, they will honor the anniversary of the D-Day landings with a crowd that is expected to include more than 300 veterans. The final day of their U.K. visit is expected to include a photo-op featuring the Queen, Prime Minister Theresa May and FLOTUS.

FLOTUS Flies Burberry Flag as She Touches Down in Britain