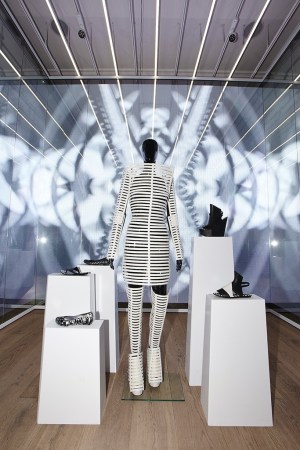 SHOE-IN: To mark the 10-year anniversary of Gareth Pugh’s label and his return to the London catwalk this season, Brazilian footwear brand Melissa — a longtime collaborator of Pugh’s — is staging an exhibition at its Covent Garden flagship store with looks from the designer’s archive.

Standout sculptural pieces include a silver zip dress from fall-winter 2008, worn by Beyoncé at the MTV Europe Music Awards that same year.

Pugh collaborated on every aspect of the staging including the looping soundtrack — the unsettling electronic “Killshot” by Ben Frost. The show is arranged against a black backdrop lit by geometric white strobes.

The Melissa x Gareth Pugh Ascension boots were a sellout for fall-winter 2014, and have been re-released for the duration of the exhibition.

Additionally, the designer’s track-soled Soldier boot collaboration with the Brazilian brand is to make a reprise on the catwalk at his upcoming show, and will be available to buy immediately afterwards. The exhibition runs until May 30, at 43 King Street in Covent Garden.