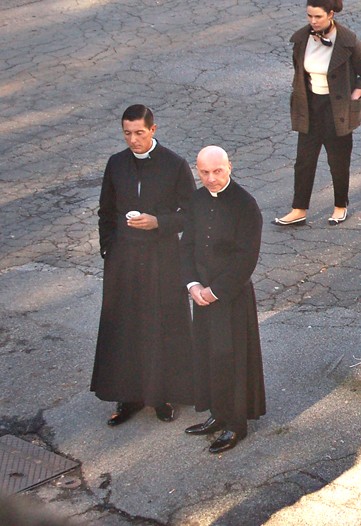 View ALL 8 Photos
MEN IN BLACK: Dolce and Gabbana are back on film, and this time it’s safe to say that “fathers” Stefano and Domenico are cast against type. Adding to a star-studded cast that includes Daniel Day-Lewis, Marion Cotillard, Judi Dench, Kate Hudson, Nicole Kidman, Penélope Cruz, Stacy “Fergie” Ferguson and Sophia Loren, the film “Nine,” directed by Rob Marshall, will feature a cameo with Stefano Gabbana and Domenico Dolce playing the roles of priests. The musical film, based on the 1982 Broadway musical, inspired by Federico Fellini’s “8 1/2,” is due out at the end of November.

The designers were captured by paparazzi last week in Rome during an in-between-scenes break, clad in long black ecclesiastical gowns. The duo are no newcomers to movie sets: They both acted in the 1995 “L’Uomo delle stelle” (The Star Maker), which was directed by Giuseppe Tornatore and was nominated for an Academy Award in the Best Foreign Film category. Their characters were quite a stretch from their real life roles, with Domenico playing a farmer and Stefano playing a photographer, though maybe not quite the role reversal their new priestly personas require.

BY THE SEA: With seaside stores in Miami and Palm Beach, Tomas Maier is extending his retail reach to another coastal town, Wainscott, in the heart of the Hamptons. The boutique, set to open this spring in a former diner on Montauk Highway, will showcase his eponymous line of swimwear and knitwear for men and women as well as ready-to-wear and accessories exclusive to the location. Other items personally selected by German-born Maier, designer and Bottega Veneta’s creative director, include jewelry, apparel, accessories, design objects and books. The 1,800-square-foot shop boasts a garden and patio, while the store’s interior wood plank floors and white washed wood walls add to the East Hampton feel.

BOYS WILL BE BOYS: Kellogg’s may have canceled its endorsement deal with Michael Phelps after he admitted to smoking pot, but Speedo is standing by its 23-year-old Olympian, to whom it gave a $1 million bonus after he won eight gold medals last fall. “Speedo would like to make it clear that it does not condone such behavior, and we know that Michael truly regrets his actions,” stated the performance swimsuit company. “Michael Phelps is a valued member of the Speedo team and a great champion. We will do all that we can to support him and his family.”

BIG NIGHT: Jason Wu’s profile has skyrocketed since dressing Michelle Obama for the inaugural balls. On Thursday night, Angela Mariani and Anne Fahey-Storment of C & M Media, which handles Wu’s publicity, hosted a party to celebrate Wu. Philip Crangi, Monica Botkier, Bergdorf Goodman’s Roopal Patel, and Kirna Zabête’s Beth Buccini and Sarah Easley braved the cold to congratulate the 26-year-old designer. Half an hour into the shindig, the penthouse at the SoHo Grand Hotel reached full capacity, and arriving guests such as Olivia Chantecaille, Olivia Palermo and James Scully were asked to wait in the hotel lobby for a while — which they all happily did for the designer, who seemed unfazed by the sudden spotlight. “These are all people who supported me from day one,” he said. The one fan missing, though, was the First Lady herself. “I think she is busy with politics,” Wu said.

MEOW MIX: There was nary a schoolgirl or sticker collection in sight Thursday night when MAC Cosmetics and V Magazine hosted a very adult party at Chelsea’s Cedar Lake in honor of its new makeup collection inspired by Hello Kitty.

Pink champagne and vodka cocktails and black bow-shaped cookies fueled the eclectic crowd, many of whom admitted to being longtime fans of the feline icon. “When I was younger, I had the school boxes with all of the pencils,” recalled pop singer Ciara. “It was a very big deal.”

It clearly still is, even for those well past their homework days. “A lot of the women in my life have been very obsessed with Hello Kitty,” said John Demsey, group president of the Estée Lauder Cos. Inc. and MAC, and chairman of the MAC AIDS Foundation.

“When the going gets tough, the world wants fashion,” said Demsey, noting that all of the dresses will be auctioned on eBay to benefit the Fashion Institute of Technology. While Demsey declined to comment on projected sales, industry sources estimated that the line did more than $400,000 within three hours of being offered for sale Tuesday on maccosmetics.com. It hit New York City MAC stores on Thursday and will be on sale everywhere else on Feb.14.

HOT STUFF: Belstaff has tacked another blockbuster movie to the list of films that have used its tough chic jackets: “The Curious Case of Benjamin Button.”

After blanketing the sets of “The Aviator,” “Ocean’s Twelve,” “Penelope,” “The Departed” and “Blood Diamond,” among others, Belstaff vice president Michele Malenotti hooked up with costume designer Jaqueline West to outfit Brad Pitt in the film nominated for 13 Oscars, including the one for best costumes.

West tapped into Belstaff’s 85 years of history and found three iconic styles that were slightly tweaked for the set.

Throughout the different phases of his unusual life as Button, Pitt dons a mud brown bomber, a shearling coat and a distressed belted safari style the actor sports while saddled to a cherry red Indian motorcycle. But the lights and action aren’t winding down at Belstaff, whose jackets will also appear in the latest “Harry Potter” movie due out in mid-July, in Quentin Tarantino’s “Inglourious Basterds” and in the new “Terminator,” both scheduled for the Cannes Film Festival.

MYLA’S NEW MODEL: Model and party fixture Poppy Delevigne is the face and body of lingerie label Myla’s spring 2009 campaign, stepping into the shoes of Lydia Hearst, who modeled the line for fall. The campaign, shot by Vanina Sorrenti — Mario Sorrenti’s sister — was inspired by 1970s romanticism, and the images spotlight Delevigne lounging on a wicker chair in pieces such as a caramel lace balconette bra and a floaty chiffon camisole. Delevigne, who’s recently decamped to New York from her native London, has also chalked up campaigns for Anya Hindmarch and Bamford & Sons in the past. The Myla campaign images were unveiled in Myla’s London stores last week.

LET’S TALK ABOUT SEX: Paris Kain of Abraxas Rex jewelry isn’t Alexander Wang’s only collaborator this coming fashion week. Wang also worked with Proper Attire and created a special packaging design for a new collection of limited edition Proper Attire condoms. The limited edition Proper Attire by Alexander Wang line of condoms will make their debut in the front-row goodie bags at Wang’s show, which, rather appropriately, is scheduled on Valentine’s Day. Those who don’t have the pleasure of being there can also buy the designer condoms at Thompson Hotels, and Properattirecondoms.com, with proceeds benefiting Planned Parenthood. “I used a spare design that felt sexy, modern and empowering,” Wang pointed out.

SALON STYLE: Come London Fashion Week, it looks like designers’ showrooms could be a rival to the runways. As perhaps a sign of the newly austere times, a number of designers in the city have opted to put on low-key presentations instead of catwalk extravaganzas. Modernist, Louise Gray, Maria Grachvogel, Aminaka Wilmont and Antoni & Alison will all hold presentations in lieu of a show, while Mulberry will hold its usual a day of presentations Feb. 23.