By Marc Karimzadeh and Matthew Lynch on May 6, 2013
View Slideshow 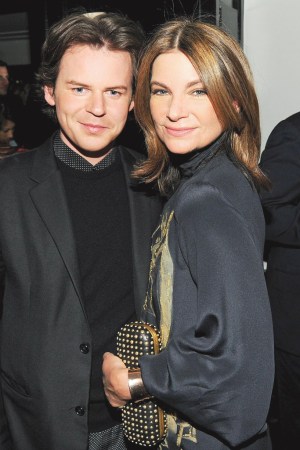 MET WARM-UP: The rarefied air of the St. Regis Hotel doesn’t exactly scream “Punk.” On Saturday night, though, Moda Operandi hosted one of the hotel’s “midnight suppers” to toast a capsule collection inspired by the Costume Institute’s “Punk: Chaos to Couture,” of which the online retailer is a sponsor. Guests including Karolina Kurkova, Kate Bosworth, Olivier Rousteing, Prabal Gurung and Eddie Borgo took in the wares over cocktails in the hotel’s Thornwillow stationery shop. Emilia Clarke talked expectations for tonight’s gala, which she’ll attend for the first time. “Everyone’s saying it’s the one time when someone steps on your train and it’s Gisele [Bündchen] and you bump into Beyoncé and Brad Pitt helps you up,” she laughed.

The small crowd then moved onto dinner in the hotel’s vault room, were, at one point, a few guests engaged in a flower fight, winging parts of the centerpiece across the room. “I’m glad we went with the flowers and not the iron skulls we originally had planned,” said Lauren Santo Domingo as a peony knocked into her water glass. “Tonight would have ended a lot differently.”

Meanwhile, over at Omar’s, the yet-to-open eatery and private club, there was such a heavy-hitting fashion crowd at Net-a-porter.com’s party that it should have really been dubbed ‘The Net Ball.’ “A lot of our designers are in town,” said Net-a-porter founder Natalie Massenet, who cohosted with Alison Loehnis and Lucy Yeomans. Giambattista Valli, Consuelo Castiglioni, Vera Wang, Erdem Moralioglu, Mary Katrantzou, Tamara Mellon, Miranda Kerr, Patrick Demarchelier, Chris Benz, Jason Wu, Jack McCollough and Lazaro Hernandez were among those who crowded the elegant environs. The music came via fashion royalty (or its offspring anyway). Sean and Anthony Souza — Carlos Souza’s sons and Valentino’s godsons — DJ’d. Despite the strong turnout, the party still felt like a family gathering. As Christopher Kane put it, “It’s very intimate, very Natalie.”