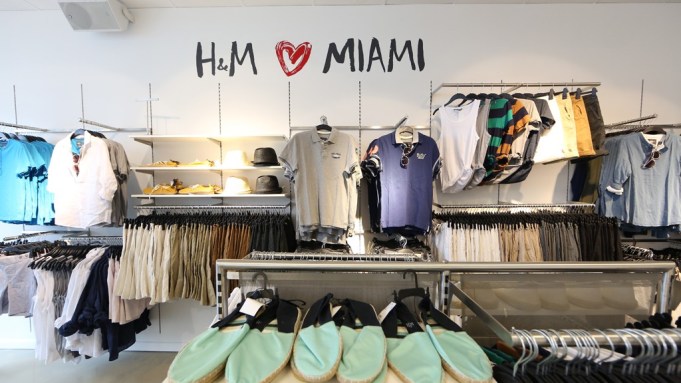 MIAMI MOMENT: After waiting more than a decade for an H&M store, rain didn’t deter Miami fans from attending the premiere of the retailer’s pop-up shop on Friday at noon. The temporary space at 1669 Meridian Avenue is a few blocks from its permanent Lincoln Road flagship, the company’s fifth in the U.S., due this fall.

The 4,000-square-foot temporary shop is stocked with men’s and women’s fashions and accessories. Many items, such as men’s shorts in charcoal cotton and a long-sleeve scuba-inspired swimsuit with an open back and zip front, are sold out nationwide.

“In a way, this merchandise is exclusive, because we held on to it for the opening,” said H&M spokesperson Marybeth Schmitt. “All the palm prints, beach towels, and sea and neon tones are so Miami.”

The 22,000-square-foot flagship will be in a former Art Deco theater that’s being refurbished to its original splendor; the former tenant, New World Symphony, had stripped most of the interior details, like colorfully striped terrazzo floors and barrel-vaulted ceilings. New elements include a grand staircase and giant LED screen where films once played.

“It’s probably our most historically significant property in America,” said Schmitt, whose favorite room is a cozy lounge that once housed a motion-sensored drinking fountain, quite an innovation in 1936, and tropical fish pool. “I think we’ll fill it with plants this time.”