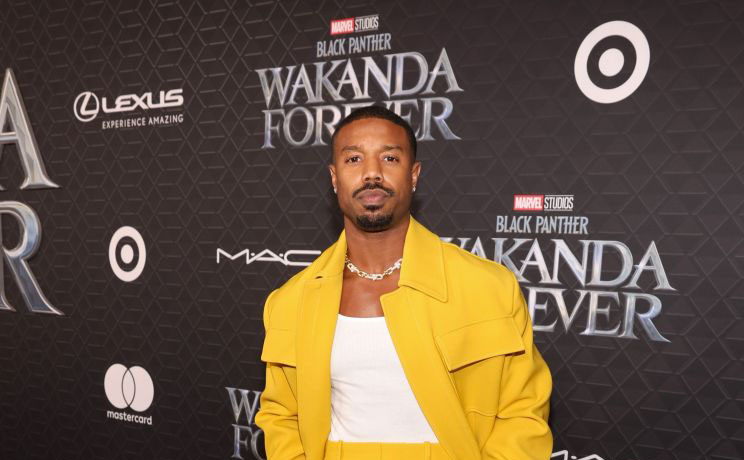 Michael B. Jordan arrived on the red carpet in a shining yellow two-piece ensemble for the premiere of “Black Panther: Wakanda Forever” on Oct. 26 in Los Angeles, California.

To celebrate the sequel to “Black Panther,” Jordan wore an outfit from Louis Vuitton’s spring 2023 menswear collection that included a long coat with oversize breast pockets over a ribbed Intimissimi tank top and pants with a split seam at the bottom of the hem. He toned down the bright yellow by wearing a pair of the brand’s black shoes.

For jewelry, he wore a gold bracelet and chain-link necklace from Tiffany & Co. He topped off the look with a gold Vacheron Constantin watch.

Louis Vuitton’s spring 2023 menswear was designed to pop on screen and featured oversize suits and coats. The line was inspired by the tenure of the brand’s late menswear director Virgil Abloh, who passed away in November 2021.

Jordan starred in the first “Black Panther” movie as the film’s villain Erik Killmonger alongside the late Chadwick Boseman, who played the franchise’s titular character. Jordan is in post-production for the third installment in the “Creed” franchise. The latest “Creed” film is set to debut in theaters on March 3. Jordan also directed the third film.