New York City's outgoing mayor, Michael Bloomberg, buzzed by the event Monday night, where he spoke with WWD about about returning to private life. 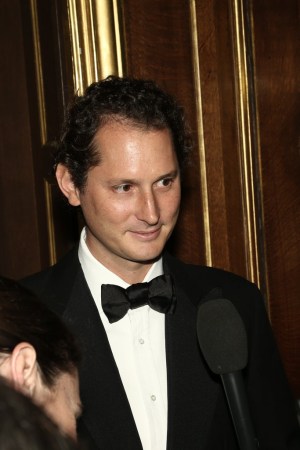 Art and culture were not just in the air but part of the program at Monday’s gala for La Fondazione NY at the Morgan Library in Manhattan.

Wearing a jacket designed by another starchitect, Massimo Vignelli, Meier said he has been floored by the construction and speed of life in Taiwan, Tokyo and China, where he has projects under way. “First of all, the traffic is as bad as it is in New York. As a visitor, you go there and they don’t think about jet lag. You get off the plane and you just go,” he said.

Before the concert started, outgoing New York City Mayor Michael Bloomberg stopped by to do his part. Greeting the mayor of Turin, Piero Fassino, Bloomberg said, “Welcome to New York. Spend some money while you’re here.”

Ever the businessman, Bloomberg told the crowd that the arts contribute about $6 billion to the city’s economy and nearly half of the 52 million visitors come for the arts. En route to another black-tie event, Bloomberg talked about a few of the upsides to returning to private life. “It will be nice to go to events like this and support cultural institutions around the world. I’ve been able to do that somewhat as mayor but that is one of my great passions,” he said. “And to help industries like the fashion industry, which is important to our world.”

Bloomberg added he has also taken on the role of the Serpentine Gallery’s chairman.

Earlier in the evening, Del Vecchio talked about his company’s expansion plans, namely European capital cities like Madrid where a Brooks Brothers store was opened two weeks ago. With two new stores in India, there are plans for two more this year.

Accepting his award for Excellence in Business, Del Vecchio said he had Elkann’s grandfather Gianni Agnelli, who was known in Italy to wear only Brooks Brothers button down shirts (with upturned collars), to thank for first introducing him to the brand. Earlier, filmmaking brothers Marco and Mauro La Villa were talking up the Agnellis for another reason. Their documentary “Black and White Stripes” is about the Turin-based Juventus soccer team the Agnellis have owned since 1923. Trying to describe their subjects to the soccer-illiterate New York crowd, Marco La Villa said, “It would be like if the Kennedys owned the Yankees for 90 years.”