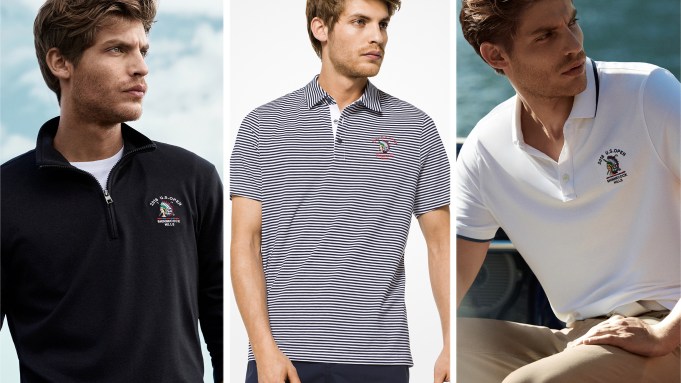 According to the company, “Michael Kors has specifically developed a range of co-branded golf polos, in conjunction with the U.S. Golf Association, for fans to purchase on-site at the 118th U.S. Open at Shinnecock Hills Golf Club, as well as select Michael Kors stores and at michaelkors.com.”

The U.S. Open begins on Thursday and ends on Sunday.

According to Mary Lopuszynski, senior director of merchandise and licensing at the U.S. Golf Association, the capsule has about eight to 10 shirts and two outerwear options. The shirts have an average price point of $86 and the outerwear is at $120.

Lopuszynski said the U.S. Open Merchandise Pavilion averages between 37,000 and 42,000 square feet, depending on location. The event, held every June, changes venue each year. This year’s tent will have 60 registers to handle the transactions, and the weekend — closer to the end of the Championship — is expected to see the most traffic. Lopuszynski said about 80 percent of the apparel merchandise is men’s, and 20 percent is women’s.

Polo Ralph Lauren Corp. is the official outfitter for the U.S. Open, and has a large apparel and accessories presence at the pavilion. According to the Ralph Lauren Corp.: “Polo Ralph Lauren has been the official outfitter of the USGA & the U.S. Open Championship since 2010 and provides custom designs for volunteer & marshal uniforms, USGA executive outfitting and USGA team event uniforms.…The partnership with the USGA reinforces Ralph Lauren’s dedication to golf as well as its leadership in major global sporting initiatives.”

In addition to Michael Kors and Ralph Lauren, other brands present include Cutter & Buck, Under Armour, Nike, Adidas, EP NY, Peter Millar and Annika, among others. Forty-six brands are represented at the Pavilion. All the top players are sponsored by the brands, such as Charl Schwartzel as the brand ambassador for Michael Kors and Justin Thomas for Ralph Lauren.

Following the event this year, Lopuszynski’s team begins research for 2019’s championship by scoping out the local market trends where it will be held next and weather conditions so they can make some merchandising decision and begin their ordering for next year’s store. They have more than 20 years of data analytics to review, so Lopuszynski’s team can make quick decisions on reorders, as well as what to order for sale based on what has sold in the past at the location the event will be held.