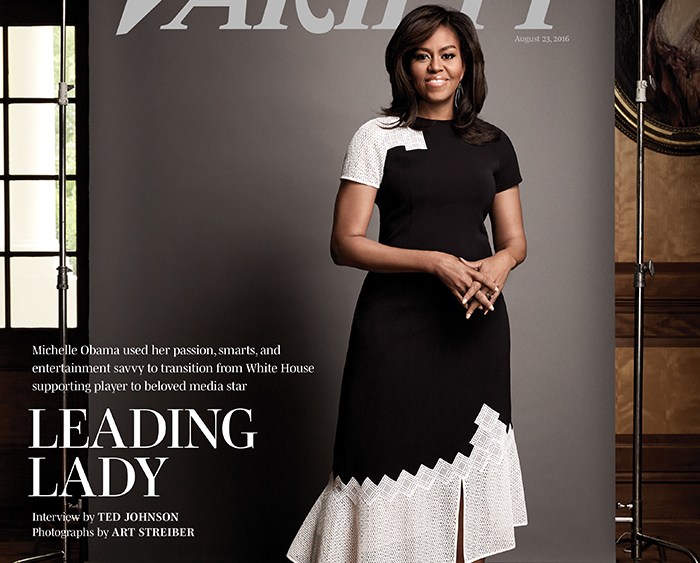 “It was a huge honor and brand milestone to work with Michelle Obama’s team on a custom dress for the cover of Variety,” Simkhai told WWD. “Michelle represents the definition of a strong, fearless, inspiring and truly elegant First Lady, and seeing her in one of my dresses was a dream come true.”

The dress, a T-shirt silhouette with contrast geometric mesh trim and an asymmetrical hemline, is currently available for purchase on Simkhai’s e-commerce site for $695. The cover marks the first time FLOTUS has worn a look by the New York-based designer, who launched his label in 2010 and was named a winner of the CFDA/Vogue Fashion Fund last year.

In the cover story, the First Lady, interviewed by Variety’s senior editor Ted Johnson, discusses how she’s leveraged the power of pop culture to advocate and raise awareness on the issues that matter most to her, from healthy eating to support for military families. From appearing on Nickelodeon’s “iCarly” to “The Tonight Show Starring Jimmy Fallon,” Obama admitted she’s taken some risks with her appearances — like the time she participated in a segment of “Billy on the Street,” pushing comedian Billy Eichner around a grocery store in a shopping cart.

Of the segment, Obama tells Johnson: “You know, that’s when I thought, ‘This is crazy.’ But again, it resonated. It was something that was successful. Maybe if I’d done that in my first year, it might have been too much. But I think by the time we did this in the second term, people knew me. They understood the approach. It allows me to take a few more risks than in the first term, when people were just getting to know who I was.”