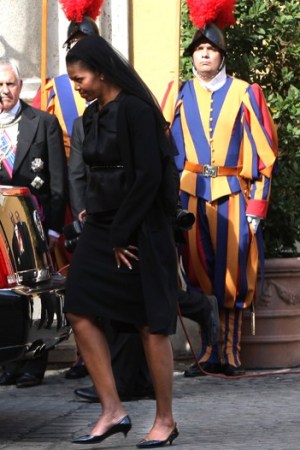 MICHELLE, MA BELLE: Michelle Obama sure knows how to be a bona fide fashion diplomat. On the first official presidential visit to the Vatican last week, the First Lady chose to wear a mix of Italian and American clothes to meet Pope Benedict XVI. Continuing her love affair with Michael Kors, she donned the designer’s black wool crepe coat. The rest, however, was all Moschino, from the black organza bow top and the black crepe skirt to the striking black silk Moschino veil.

On her extended European trip, Obama rotated her group of core American regulars, wearing pieces from the likes of Kors, Narciso Rodriguez and Jason Wu.

She was back in Kors for the first family’s arrival in Ghana, where she wore the designer’s black square neck sheath dress.

NEW FACE IN THE TENTS: Maybelline New York, which touts itself as the top-selling makeup brand in the global mass market, is said to be close to signing a deal to become a lead sponsor of the Mercedes-Benz Fashion Week in Bryant Park. Maybelline, a division of the Paris-based L’Oréal, has never played a role in the Bryant Park shows, but the brand has had fashion sponsorships in Germany, according to sources. Maybelline’s new sponsorship deal is thought to be for a two-year period for both the September and February shows, first in Bryant Park and then at Lincoln Center. A L’Oréal spokesman could not be reached for comment.

The move comes after MAC Cosmetics, the previous cosmetics industry backer of the fashion shows, was said to be in talks to become a lead sponsor for runway shows and presentations at Milk Studios during fashion week. According to sources, MAC is withdrawing its sponsorship from the Bryant Park shows in favor of backing the Milk Studios venue. A MAC spokeswoman confirmed late Friday that MAC will no longer be the cosmetic sponsor of fashion week at the tents. However, the company will continue to do the backstage makeup for a multitude of shows.

ASIAN DREAMS: Geoffroy de La Bourdonnaye, Liberty’s chief executive officer, is in Japan meeting with customers and touting the London flagship’s transformation into an edgy, fashion-forward specialty store. He also revealed Japan’s role in its future strategy. Liberty, famous for its color-rich prints, will feature a Japanese theme in its fall/winter 2010 collection of fabrics. The company is also planning collaborations with a few Japanese artists and designers, including Tsumori Chisato, Yoshie Watanabe and Mika Ninagawa. “Japan has always been the number one source of inspiration,” said de La Bourdonnaye, noting Liberty’s founder, Arthur Lasenby Liberty, started his career selling Japanese fabrics and objects d’art in 1875. The executive said the company might open a store in Japan for its Liberty of London range of apparel and accessories at some point, although there is no concrete plan at the moment.

In other Liberty news, the brand is preparing its latest collaborative effort: a special one-off range of bags, accessories and other items designed with 10 Corso Como. The store is also planning something special for Christmas, when it will hand over the creative reins to Luella Bartley, who will develop quirky in-store displays and windows for the season.

IN THE MOOD: Chris Klein, Rumer Willis and Amanda Righetti were among the celebrities who turned out last week to celebrate Moods of Norway’s first store, a 2,500-square-foot space on Robertson Boulevard in Los Angeles. “It’s a beautiful, beautiful new line,” said Klein. Moods of Norway, founded in 2003 by Norwegian designers Simen Staalnacke, Peder Børresen and Stefan Dahlkvist, has something of a celeb following, including Dave Navarro, Gwen Stefani and Will.i.am. “Los Angeles is just a fantastic place. We love the sunshine, we love the fashion, and I think our funky colors really go hand in hand with the taste here,” said Dahlkvist, who plans stores next in New York and Miami.

CLOSE TO HOME: Los Angeles designer Eva Varro, whose vivid print and stretch designs are sold at Bloomingdale’s, Nordstrom and boutiques across the U.S., will open her first store in Macerich’s Santa Monica Place next year. The Hungarian-born designer started her career with swimwear and resides in Santa Monica, making the soon-to-open shopping center a close-to-home fit for Varro, who has celebrity clientele including Eva Longoria Parker, Jane Seymour and “Twilight” actress Ashley Green. Celebrity fans aside, Varro’s designs have gained traction because of their reasonable prices, typically ranging from $100 to $200.

The Frank Gehry–designed indoor mall is in the midst of a $265 million conversion to an open-air shopping center, but has been delayed several times. Earlier this year, owner Macerich announced Santa Monica Place would open in the middle of 2010, but plans now call for an August 2010 debut as a way to avoid opening amid the downturn. Other tenants include anchors Bloomingdale’s and Nordstrom, as well as local and national brands like Coach, Kitson, True Religion, BCBG Max Azria, Ed Hardy and Joe’s Jeans.

SUMMER EXHIBIT: Donna Karan has an affinity for art. Her late husband, Stephan Weiss, was a sculptor and painter, and she has used his former studio on Greenwich Street for several art exhibits. This Sunday, the designer is welcoming artist Dana Matthews at her Urban Zen store in Sag Harbor, N.Y. with a daytime tea and lemonade party. It will serve to kick off a summer show of Matthews’ New York landscapes and pieces from the “Botanicals and Outer Space” series at the store. Those who don’t make it out east this weekend need not fret, though: The pieces will be on display at the store through August 5.

BOYS’ CLUB: For the eighth anniversary of New York-based sportswear label Robert Graham, president Neil Kusnetz and designer Robert Stock journeyed across the country to Santa Monica, Calif., where they feted the occasion with actor Billy Baldwin and other fans at the boutique Ron Robinson at Fred Segal. In addition to launching a club for customers who have amassed more than 100 of the line’s colorfully embellished shirts, the company plans to introduce hats, silk shirts and freshly laundered shirts next spring, along with a fragrance and shoes in the next 12 months. It’s also eyeing New York’s West Village for the location of its first freestanding store. The new shop certainly would help Baldwin satisfy his craving for Robert Graham, which is the source of a seersucker jacket and a few shirts hanging in his closet. “This is versatile clothing. You can use it for a lot of different things,” Baldwin said. “If you’re going to an event with a jacket and a tie or you can just sort of, you know, walk around your house in your underwear in it if you want.”

TOUR DE FORCE: As Lance Armstrong strives for a record eight Tour de France victories, the Galerie Emmanuel Perrotin in Paris is hosting “Stages,” an exhibition of leading artists including Richard Prince, Cai Guo-Qiang and Aaron Young, who’ve created works inspired by Armstrong to raise cancer awareness. Sponsored by Nike, the pieces will be revealed next Thursday, where a host of participating artists including Tom Sachs, Ed Ruscha and Shepard Fairey, plus Nike’s chief executive officer Mark Parker, are due to attend. The show will head to the U.S. this fall with proceeds going to the Lance Armstrong Foundation, Livestrong, established before the cyclist knew he would survive his own cancer. On his regularly updated Twitter feed, Armstrong said all the bikes he’s ridden this tour, customized by the likes of Marc Newson and Damien Hirst, are to be auctioned off for Livestrong. On seeing the Hirst bike, which he’ll use in a later stage, Armstrong tweeted he was “speechless.”

RISE AND SHINE: Luxury linens firm D Porthault, whose French business went into receivership last month, is forging ahead with store openings. The firm, whose business in the U.S. and Asia remains solvent, will open two new stores, in London in October and in Palm Beach, Florida in November.

Porthault’s French operations had accrued debt of $3.7 million by the end of 2008, largely due to the construction of a new factory.