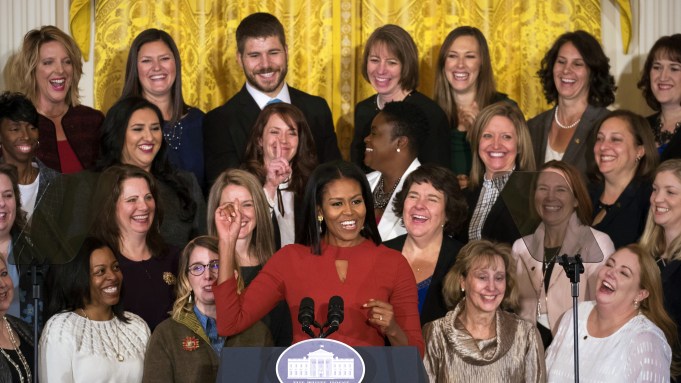 For her last official event as First Lady of the United States, Michelle Obama wore a Narciso Rodriguez dress from pre-fall 2017. Making her final speech in the East Room of the White House on Friday during a ceremony to honor the 2017 school counselor of the year, Obama wore a red crepe dress with a keyhole neckline and a striped panel on the skirt.

It was an emotional address, with the First Lady becoming visibly choked up as she told the audience that “being your First Lady has been the greatest honor of my life, and I hope I’ve made you proud.”

The event was part of Obama’s “Reach Higher” initiative started in 2014. “We wanted to make higher education cool,” she said, driving home the program’s message encouraging young people to invest in their education. “So don’t be afraid. You hear me, young people? Don’t be afraid. Be focused. Be determined. Be hopeful. Be empowered. Empower yourself with a good education,” said Obama. “Then get out there and use that education to build a country worthy of your boundless promise. Lead by example with hope; never fear.”

The First Lady has worn Rodriguez many times over the last eight years, including election night 2008; for a recent meeting with Queen Elizabeth II; at President Obama’s final State of the Union address last year, and for her meeting with Melania Trump two days after the presidential election in November. For that occasion, Obama wore a Rodriguez dress she initially appeared in in Argentina during the last South American tour.

Of seeing Obama in his design for her final remarks as First Lady, and over the course of the Obama administration, Rodriguez said, “It is such an honor to dress our remarkable First Lady. I have an infinite amount of admiration for her and how much she has accomplished for America. Seeing the First Lady in my designs has been among the most humbling moments of my career.”