First Lady Michelle Obama is propping up domestic businesses by wearing American designers, this time Isaac Mizrahi to the State of the Union address. 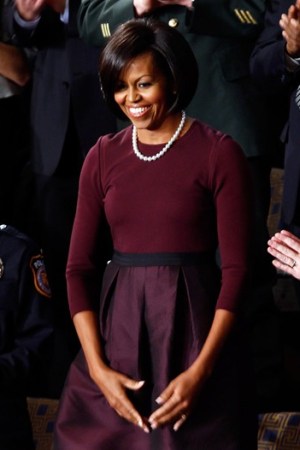 STATE OF A UNION: Propping up American business was a central theme of President Obama’s State of the Union address Wednesday, and his wife Michelle did just that for Isaac Mizrahi, by wearing one of his designs. The First Lady bought the raisin-colored dress with a knit top and a silk ottoman skirt that retails for $1,850 through Ikram Goldman, according to a Mizrahi spokeswoman. It was not known at press time whether she paid retail or wholesale. First Lady fans will soon be able to copy her look. A similar version in a size 12 is available in the designer’s Upper East Side store, and other sizes can be special ordered. The designer knew he was in the running for the big event, but wasn’t certain until he watched the speech in his West Village apartment with his dog, Harry.

CLOTHES CALL: Helmut Lang has been cleaning out his closets — big time. The retired fashion designer just finalized two large donations from his vast archive. Les Arts Décoratifs in Paris is to receive 82 complete looks, including accessories, while the Kyoto Costume Institute will get 123 head-to-toe outfits. Lang’s team has been quietly fielding requests for donations over the past year to a range of top fashion, design and contemporary art institutions, including the Victoria and Albert Museum in London and the Los Angeles County Museum of Art. Lang also remains active in the art world, and has finalized a commission for the Deste Foundation of Contemporary Art.

BRIGHT IDEA: Alek Wek hosted a cocktail party Wednesday night in Paris to fete the limited edition candle created by (Red) and Diptyque. Ten percent of the money generated from the 42 euro, or $58.70 at current exchange, candle will go to (Red), whose proceeds benefit the fight against AIDS in Africa. Wek joined (Red) International chief executive officer Seb Bishop and Diptyque executive director Fabienne Mauny, among a host of guests at the event held in the Maison de l’Afrique. “When this project came up, I couldn’t help but want to come on board,” said Wek, who fled her native Sudan as a young girl. Meanwhile, Wek’s days are chockablock with activities including working with the U.S. Committee for Refugees’ Advisory Council and designing her handbag collection. She said she’d recently wrapped up a shoot in Amsterdam for German Glamour, as well.