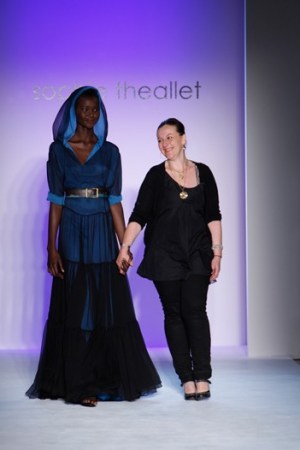 MICHELLE’S LATEST CHOICE: For the unveiling of the bust of abolitionist Sojourner Truth at Emancipation Hall on Tuesday, Michelle Obama chose yet another new designer (Sophie Theallet) and familiar silhouette (narrow waist, full skirt). Yet the choice was especially savvy given that Theallet, a French-born, Brooklyn-based designer who is a 10-year veteran of Azzedine Alaïa (another Obama fave), was the only designer to use an entire casting of black models for her debut spring 2009 runway show. “When I was designing that first show, which was before the election, I was just thinking about colors,” said Theallet, who noted she found out the First Lady was wearing the striped shirt dress while poking around the Internet on Tuesday afternoon. “I think that black models and black skin are very beautiful, and I wanted to express that. When people saw my clothes, they said, ‘Oh, Michelle, she would be so good in these clothes.’ She’s a beautiful lady and she is very well-dressed and she looks stunning all the time. Especially on this day, for this occasion, I’m honored.” About a month ago, Theallet said, she sent the shirt dress to Ikram Goldman, the Chicago boutique owner who has been acting as Obama’s personal shopper and stylist. While Goldman’s store, Ikram, does not carry Theallet’s line, Goldman did attend Theallet’s fall 2009 runway show, and Goldman herself placed the order for the dress, the measurements for which Theallet respectfully declined to give. Theallet did add the dress, which is sold at Jeffrey and Barneys New York, was accounted for once it arrived: “My business partner handles these things, but yes, it was paid for. Someone sent a check.”

BACKSTAGE PASS: John Galliano fans can get a glimpse of all the behind-the-scene antics of last year’s two runway shows, thanks to lensman Mark Leibowitz. Laura Blokhina and Lily Donaldson are among the models captured by the Glamour photographer. Once the pics are packed up in New York on Friday, their next destination is the Cannes Film Festival, where they will be shown at a yet-to-be-named location. Mayor Michael Bloomberg’s interior decorator Jamie Drake and Ivanka Trump were among the 200 guests who eyed the kaleidoscopic images at a party Saturday night.

CLOSING SHOP: Hogan, the Tod’s SpA-owned sport inspired luxury inspired accessories brand, is closing its sole U.S. store. The Spring Street boutique in Manhattan will shutter its doors in June. A Tod’s spokesman said the firm is looking to open a Hogan store uptown reflecting the new retail concept it will launch soon. “We are taking advantage of this moment and that fact that the lease was expiring to finally find an uptown location that will have the right size and visibility,” said the spokesman. “This is going to be a very positive upgrade. Hogan today is the highest growing brand for Tod’s Group. We foresee a very positive growth in the U.S. market.”

TOP WHITE T-SHIRTS: Topman is launching its fourth project in which it invites a handful of designers to create a version of a wardrobe staple. Past projects have featured white shirts, sunglasses and black trousers. This time white T-shirts are getting the designer treatment from Richard Chai, Phillip Lim, Juun J, Henry Holland, J.W. Anderson and Christopher Shannon. Anderson and Shannon were both selected to participate in the retailer’s MAN show during the most recent London Fashion Week. The T-shirts will launch online and in a few select Topman locations, including New York and Oxford Circus, London, on May 28. In addition, designer Antony Price has designed a second “Priceless” collection for Topman, which launches May 14. Price is best known for his fashion influence on Brian Ferry and Roxy Music, as well as David Bowie and Duran Duran. The retailer’s affair with Eighties style shows no signs of cooling.

SCHOOLHOUSE ROCK: The likes of Tory Burch, Tim Gunn and Dana Buchman gathered Monday night at Westside Loft to raise funds and awareness for Promise, the Center for Attention and Learning Disorders at Lenox Hill Hospital. In Style magazine’s Cindy Weber-Cleary and Glamour’s Sasha Iglehart helped cochair the event, along with chair Dana Buchman, to solicit brands such as Chanel, Kara Ross and Fendi to donate their finest accessories for the organization’s second annual Designer Accessories auction and cocktail. “It’s like putting on a collection — minus the staff,” said Buchman, who seems to be enjoying the retired lifestyle, although she is working hard to support the cause. The auction raised $200,000.

FICKLE FORTUNES: London’s Sunday Times last weekend published its list of Britain’s 1,000 richest people for 2009, and Britain’s tycoons are suffering — for the most part. Over the past year, De Beers chairman Nicky Oppenheimer has seen his fortune fall by $2 billion to $2.2 billion; Topshop owner Sir Philip Green and his wife Lady’s money pile shrunk by $733 million to $5.6 billion; while Sir Anthony Bamford lost $1.4 billion and has a new net worth of $1.3 billion. All figures have been converted from the pound at current exchange. Green, however, is now Britain’s sixth richest man — he was number nine last year. Lakshmi Mittal, the steel magnate and his family occupy the top spot on the list with an estimated fortune of $15.8 billion. But not everyone saw their fortunes dip: Lawrence Stroll, Michael Kors’ backer, saw his net worth rise by $193 million to $468 million. It was the list’s fifth largest increase during the year. “I actually haven’t seen the list, so it’s news to me,” said Stroll. While he stopped short of attributing all of that increase to the success of the Kors business, Stroll said: “We are certainly doing very well.” Mohammed al Fayed was the 11th biggest riser on the list, with a fortune estimated at $954 million after Harrods Holdings increased its profits to $81.7 million in 2008. Meanwhile, Natalie Massenet, the founder of Net-a-porter, has made it onto the paper’s list of the top 2,000 richest people in Britain, with a fortune of $79 million. Massenet also ranks as Britain’s 98th richest woman.

LUXURY LOVE-IN: Mulberry’s in the mood for love. The British label was so taken with Chris Craymer’s photographs of loved-up couples that it plans publish his latest book, “Romance.” Craymer’s work, which is characterized by witty shots — one picture captures a couple kissing under a giant lampshade — will be displayed in Mulberry’s store windows worldwide. To fete the launch, Mulberry’s creative director, Emma Hill; Steven Kolb, executive director of the Council of Fashion Designers of America, and Craymer will host a party in New York on May 14 where signed copies of the books will be sold and framed prints will be auctioned, with proceeds to benefit the CFDA.

VERA CALLING: Vera Wang just put her design touch on a different kind of accessory — a BlackBerry smartphone from Verizon Wireless. The designer, who is nominated for an Accessory Designer of the Year award by the Council of Fashion Designers of America, created the Swarovski crystal encrusted piece for the The Breast Cancer Research Foundation, which was founded by Evelyn Lauder. The smartphone will be raffled off by Elizabeth Hurley at the Hot Pink Party on Thursday. There will no shortage of suitable candidates for the prize. The gala, at the Waldorf-Astoria, is expected to draw guests such as Michael Kors, Donna Karan and Jane Krakowski, as well as a performance by Sir Elton John and Liza Minnelli.