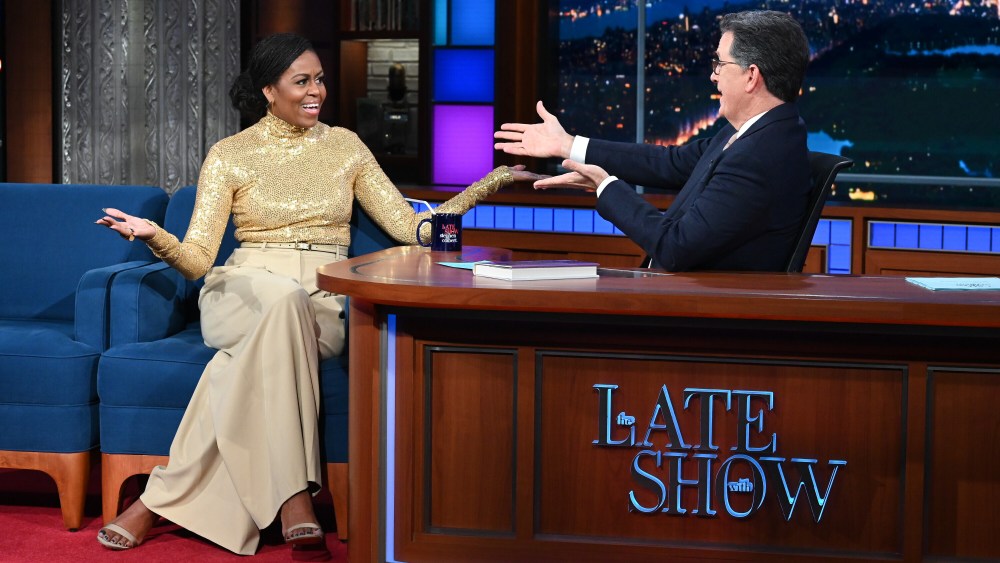 For her television appearance, the former first lady donned a sequin gold Lurex turtleneck sweater and a pair of wide-leg cream trousers, both from Michael Kors Collection. Obama completed the look with matching sandals.

She accessorized the look with a thin off-white belt with a gold buckle.

For makeup, Obama went for a television-ready look, including a glossy lip, a hint of blush and heavy mascara. She had her hair braided and tied into a tight bun.

Obama is currently on tour promoting her new book, “The Light We Carry.” The book is a follow-up to her memoir, the number-one New York Times Best Seller, “Becoming.”

During her chat with Colbert, Obama discussed her now-famous catchphrase from the 2016 Democratic National Convention, “When they go low, we go high.”

“For me, going high is not losing the urgency or the passion or the rage, especially when you are justified in it,” she said. “Going high means finding the purpose in your rage. Rage without reason, without a plan, without direction is just more rage. And we’ve been living in a lot of rage.”

Obama has been making the television rounds to promote her new book. Earlier that day, she also appeared on “Today With Hoda & Jenna” wearing a bright yellow wide-leg pantsuit from Proenza Schouler.

Since leaving the White House in January 2017 after the end of her husband President Barack Obama’s second term, Michelle Obama has not only written two books and produced a documentary, but she also launched “The Michelle Obama Podcast.” In February 2021, she was also announced as the executive producer of a children’s cooking show, “Waffles + Mochi.”