The First Lady wore a Calvin Klein ensemble to the Oslo City Hall, where where President Barack Obama accepted the Nobel Peace Prize on Thursday. 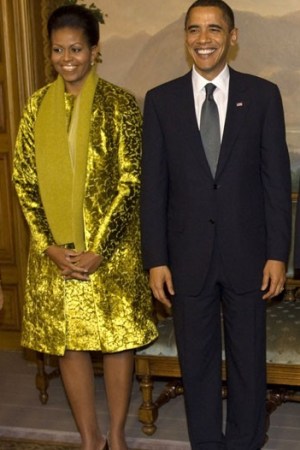 What to Know About UCLA Gymnast Nia Dennis

Michelle Obama continues to wave the flag for American fashion abroad — even if she likes to flirt with the Europeans every once in a while. The First Lady chose to wear a Calvin Klein Collection ensemble to the Oslo City Hall, where President Barack Obama accepted the Nobel Peace Prize on Thursday. Marking the first time Michelle Obama wore one of Francisco Costa’s designs for the house, she combined the sulfite laser-cut velvet dress and jacket with a yellow cardigan from Nina Ricci. Earlier in the day, she emerged from Air Force One in a blue wool-cashmere coat from Narciso Rodriguez.

Elsewhere, the First Lady sported a washed rose print and tweed dress from Rachel Roy’s spring 2010 collection for Barbara Walters’ “The 10 Most Fascinating People of 2009.”

Dressing the First Lady continues to top holiday’s wish lists for many designers here and in Europe, including Roberto Cavalli. “I would like to design a beautiful sheath for her, but it will be really hard to choose the color for Michelle Obama,” Cavalli told WWD before taping Thursday’s episode of “The Martha Stewart Show.” “Maybe a black one with some small detail of Cavalli print, or a very bright color? Oh my god, it would be very difficult, but I love her so much I’m sure I would create something special.”

Cavalli is all too aware the First Lady doesn’t typically wear a lot of Italian fashion, but he doesn’t hold it against her. “She should wear American,” Cavalli said. “Maybe she loves Italian designers, maybe she loves me. I don’t know. I hope! But she should be American because she has to promote American designers — I understand.”

FOR MORE ON MICHELLE OBAMA’S STYLE >>