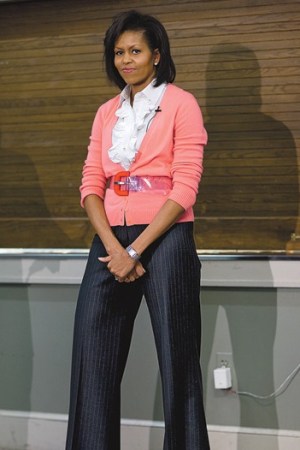 FIRST IN FASHION: Speaking of first ladies, stylish women know that if they like the look of something, they better get their hands on it quickly before it sells out. Case in point: First Lady Michelle Obama. Isaac Mizrahi’s first Liz Claiborne collection just hit stores and, on Thursday, she was spotted wearing a white ruffle Liz Claiborne New York blouse while visiting Miriam’s Soup Kitchen near the White House. She teamed the look with a pink cardigan, black pants and a Sonia Rykiel plastic belt. Obama is wearing the same belt on the April cover of O, The Oprah Magazine, where she uses it to accessorize a Michael Kors dress and Dear Cashmere cardigan. “She has an amazing proportion and anything she wears takes on the Michelle Obama mystique,” Mizrahi said.

BLUE CLUES: While associated with the avant-garde, Hussein Chalayan is bringing his design touch to an everyday item: jeans. The London-based designer has signed a collaboration deal with premium denim firm J Brand. The women’s styles will be for fall retailing, and the firm’s principals were front row at Chalayan’s show on Sunday. Also new for next season are sneakers made by the designer’s parent Puma, said Chalayan chief executive Giorgio Belloli. The thigh-high boots and sexy pumps stalking the runway were made by Sergio Rossi, part of PPR’s luxury arm, Gucci Group. Meanwhile, actress sisters Clotilde and Annelise Hesme are looking forward to playing opposite each other for the first time in “Un Coin Calme,” but not as sisters. “We play complete opposites: two women who meet in extreme circumstances,” said Clotilde.

SPECTATOR SPORT: Carla Bruni-Sarkozy, who has been extremely loyal to Christian Dior for event dressing, is branching out. France’s glamorous First Lady wore a dress from Chanel’s cruise collection at a benefit gala for Hadassah France in Paris last week.

THE MATERIAL GIRL MEETS THE ‘KING OF FASHION’: Madonna and Christian Audigier aren’t exactly known for their subtlety. So it’s no surprise their new collaboration is veiled in feigned secrecy until a big press conference is held in the coming weeks. The Mirror reported that the Material Girl would launch a clothing line with Ed Hardy, the tattoo-inspired brand founded by Audigier, in her second attempt to clothe the masses after her sportswear synergy with H&M in 2007. Audigier, who anointed himself the “King of Fashion” after raking in millions of dollars with scores of blinged-out licensees, denied Madonna is working with Ed Hardy. “It’s a completely new project,” he said. “It’s a new brand. Actually, it’s more than a brand.” Madonna would be the second Eighties icon Audigier is courting. The Los Angeles-based designer has been spotted recently shopping on Beverly Hills’ Rodeo Drive with Michael Jackson. Audigier declined to divulge details of his new project with Madonna, saving them for the upcoming press conferences he’s coordinating in Los Angeles and New York. “I’m preparing a huge deal,” he said.