A percentage of proceeds earned for each product goes to When We All Vote.

When We All Vote unveiled the second and final drop of its Vote 4Ever merch today, as part of the mission to change the culture around voting and increase participation in every election.

With 33 days until the election and state voter registration deadlines beginning next week, the merchandise is designed to reach eligible voters and build excitement to participate in every election.

“It’s critical that we continue to engage voters in creative ways to encourage them to get registered and vote early,” said former First Lady Michelle Obama, who launched When We All Vote. “In our mission to change the culture around voting, this project helps inspire new conversations around voting and making your voice heard, especially among young people. My hope is that people are inspired and motivated to vote this year – and that the Vote 4Ever Merch line can help everyone feel connected to something bigger than themselves.”

The products, whose prices range from $14 to $215, include apparel, accessories, jewelry, homeware, pet and beauty products. The brands also represent a diverse group including Black, Asian-American, Persian, Indian and women-owned businesses.

The brands for this release include Melody Ehsani, which has designed a gender-neutral sweat suit with the message, “The Power of the People Is Greater Than the People in Power.” There is also Supervsn, which designed a Vote hoodie with a QR code; The Hundreds, which made a T-shirt; Stella & Haas, which created Vote rings in gold, and Levi’s, which is offering a denim Vote jacket.

Rounding out the offering is Girlfriend Collective, which designed a custom, “Please Vote, Please Recycle” sock; Shiffon Co., which made earrings; General Admission, which designed a tote with 12 buttons from different brands, and Wild One, which made a popular pet walk kit and bandana, which includes messaging such as “Dog of a Voter,” “Barks for Ballots,” “Walk Me to the Polls” and “Dogs for Democracy.”

Two brands — Bright Black, which designed a candle with custom artwork representing a letter from Ida B. Wells commemorating women’s suffrage, and Franca NYC, which created a mug with a handprinted Vote — whose products sold out within hours during the first drop, will be restocked in limited quantities for the second drop. 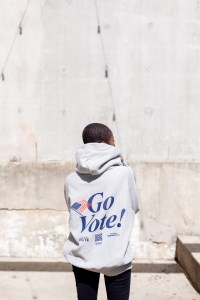 The QR code will be featured on all packaging that takes people directly to voter registration and making a plan to vote. 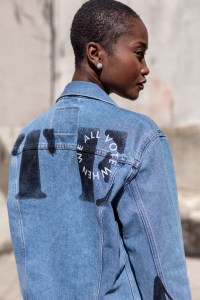 When We All Vote’s culture team is led by Stephanie L. Young, Cyrstal Carson and Jade Bernad. They enlisted the expertise of Meredith Koop, creative adviser of merchandise, and Sarween Salih, brand strategy adviser of merchandise, to develop and curate the line. Products can be purchased at vote4evermerch.com, starting at 11 a.m. ET today. Select items will be available at Revolve.com. Between 50 and 100 percent of proceeds earned from each product will be donated to When We All Vote.

When We All Vote is a national, nonpartisan, nonprofit founded to increase voter participation in every election. Launched by Obama in 2018, the organization is committed to closing the race and age voting gap.