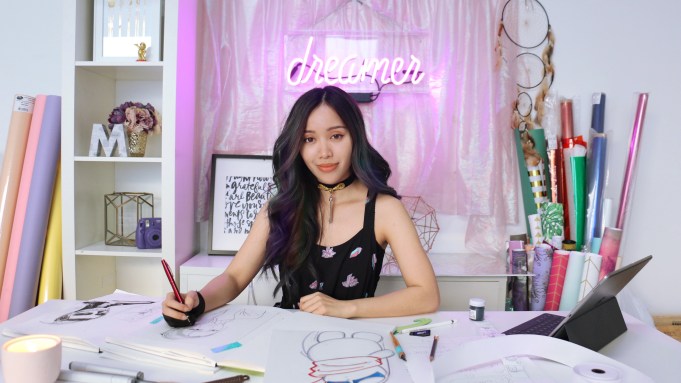 DIGITAL DRAW: Michelle Phan is embracing her graphic side. The digital beauty entrepreneur has expanded her repertoire to the graphic novel realm with the launch of her first comic, “Helios : Femina.” The illustrated series is available on the online publishing platform Line Webtoon, which utilizes a vertical scroll format, and features a female lead character. To coincide with the comic’s launch today, Phan will also appear as a panelist at the platform’s SxSW “Women in Digital Comics” event.

Phan has been developing the concept for “Helios : Femina” since she was 11. “The setting of the story is based on a not-too-distant future when the world has undergone a massive global change,” she explained. While Phan sketched the majority of the comic herself, she worked with several artists to refine the details. “I had to learn to let go of control,” Phan remarked on the collaborative process. “As a creator — especially an online content creator — I’m so used to just doing it myself. I had to almost train myself to let go of that control and trust in the team that could help me do it.”

She compared her interest in creating beauty content to developing the comic. “Just like how I uploaded my first video in 2007, I didn’t expect anyone else to watch it. I was really just doing it because I wanted to make something and share my passion for makeup,” she said. “In this case, I’m doing the same thing: I’m creating something, and I don’t have any expectations. I just want to tell a story.”

Phan also found some personal beauty inspiration from the comic: she recently dyed her hair in the style of the comic’s main character. “The makeup looks I’m creating in the comic, hopefully I can inspire people to do them in real life,” she said.