Milly for DesigNation, which arrived in Kohl’s stores and Kohls.com on Thursday, was feted Wednesday night at a party at the Isola Trattoria &amp;amp; Crudo Bar at the Mondrian SoHo in New York. 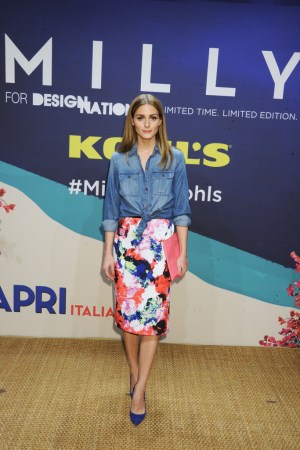 FLOWER POWER: Milly for DesigNation, which arrived in Kohl’s stores and Kohls.com on Thursday, was feted Wednesday night at a party at the Isola Trattoria & Crudo Bar at the Mondrian SoHo in New York. Michelle Smith, designer of Milly, mixed and mingled with celebrities such as Olivia Palermo, Chanel Iman, Hannah Davis and Zosia Mamet, who sported various looks from the limited-edition collection. “I was inspired by my trip to Capri,” said Smith, who recalled that when she was approached by Kohl’s to do the collection, she was told she could select any destination she wanted and they would send her there.

She called the collection “the epitome of La Dolce Vita.” There are vivid colors, prints, stripes, and florals, inspired by the Mediterranean views and the native bougainvillea flowers that grow all over the island. The 71-piece offering features flirty floral dresses, skirts, tops, tanks with sayings on them, and a few children’s pieces inspired by Milly Minis, Smith’s children’s line. It’s the first DesigNation to feature women’s and girl’s apparel. Among the highlights of the line are a floral midi scuba skirt ($50); striped fit and flare dress ($84); sheath scuba dress ($68), and the slubbed graphic tee ($48). Smith expects the one-off collection “to be in and out of the store.”

All of the styles retail for under $100. Smith is the sixth designer for Kohl’s DesigNation. Previous designers have been Narciso Rodriguez, Derek Lam, Peter Som, Elie Tahari and Catherine Malandrino. Fall 2015 will feature Thakoon Panichgul.