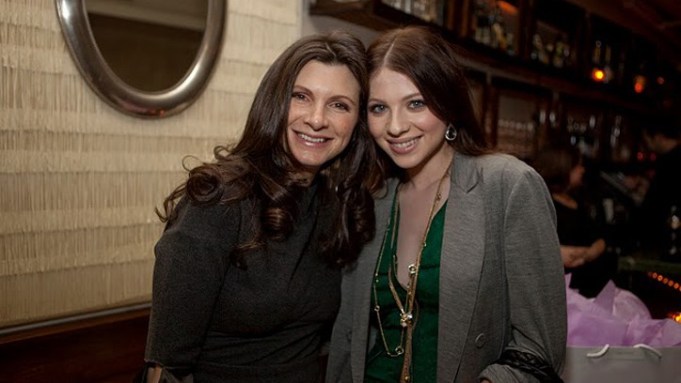 BAG GIRL: Michelle Trachtenberg of “Gossip Girl” was guest of honor Thursday at a dinner at New York’s Stanton Social to celebrate her handbag collaboration with Botkier. The actress created a special bag for Shopbop.com, whose proceeds benefit Oxfam International. Trachtenberg clearly has a knack for accessories — last fall, she was tapped to design jewelry for Coach’s youthful Poppy line. On-screen, the actress is reprising her role as bad-girl Georgina Sparks on the hit drama and is enjoying every backstabbing minute of it.

HEART MATTERS: Michelle Obama has yet to RSVP for next month’s Heart Truth: Red Dress Collection fashion show at Bryant Park, but the roster of celebrity models is shaping up. Estelle, Felicity Huffman, Kim Kardashian, Robin Roberts and Kristin Chenoweth are planning to hit the catwalk wearing red dresses to help raise awareness about the risk of heart disease. Taking a turn from tradition, the show will be held at night for the first time — Feb. 11 at 7 p.m.

IN HIGH COTTON: Designer Gina DeSilva took home the best-in-show award for her dramatically ruffled evening gowns at the third annual Supima design competition and runway show on Tuesday evening. The event, hosted by Katrina Szish and model Coco Rocha at The New York Times Center, was the culmination of a three-month process that kicked off with an open call at Bloomingdale’s 59th Street in October. Entrants were whittled down to the six finalists who presented their designs — all fashioned from Supima fabrics — to an audience that included Supima president Jesse Curlee. Also part of the competition, designer Robin Tomas won for a men’s T-shirt design, a triple-layer concoction that will be sold at Bloomingdale’s stores, along with an existing Supima-branded line of luxury basics. Supima is the trade group representing American growers of Pima cotton.

WISE EYES: Justin Timberlake soon will sport his own shades. William Rast, the label he cofounded with Trace Ayala, has entered a multiyear licensing agreement with Viva International Group to design, produce and distribute William Rast eyewear and William Rast Racing eyewear for men and women. The collections will hit William Rast shops and department stores worldwide in 2011. The line will complement Rast’s existing contemporary apparel, which focuses on premium denim, leather goods and knits. Retail prices are not yet available.

FACONNABLE EXIT: Eric Wright will leave as artistic director of French brand Façonnable on Jan. 31 and will be succeeded by an in-house design team. The Nice, France-based company said Wright had helped to revive the label since coming on board in September 2008. Wright, formerly with Roberto Cavalli and Karl Lagerfeld, was hired to boost the profile of Façonnable after its purchase from Nordstrom in 2007 by M1, a family-owned company based in Beirut, Lebanon.

GOT A JOB?: Pharrell Williams is such a big fan of Lanvin, he wants to work for the brand. Backstage after Sunday’s menswear show, he approached artistic director Alber Elbaz to offer his services. “It would be an honor,” he told the designer. Earlier, Williams told WWD he would be interested in fronting a Lanvin campaign or designing a luggage line for the brand. Meanwhile, former Libertines frontman Carl Barât was trying not to think about his stage debut Tuesday in the play “Fool for Love” at London’s Riverside Studios. “I’m absolutely petrified,” he confessed. After the play ends its run, Barât will head to Morocco to start recording his first solo album. As for the much-touted possibility of a reunion with his former Libertines bandmate Pete Doherty, Barât remained hopeful, despite the fact that Doherty did not respond to his most recent text message. “He might have changed his phone. I’ll resend it,” he said with a shrug.

FACE TIME: Look who’s moonlighting as a model: Olivier Theyskens. The former designer of Nina Ricci and Rochas accepted an invitation to pose for a fashion spread in the latest issue of Paris, LA magazine. Theyskens even brought some of his own clothes, including a vintage embroidered jacket and a tattered T-shirt. In photos by Michael Hemy, Theyskens also models a sheer top by Raf Simons and poses shirtless, a fur bandana by Rick Owens around his neck and his face obscured by his long, raven locks. Paris, LA is published twice a year by Paris-based Do.Pé. Press, a creative consultancy.

POLITICS OF STYLE: Former British Prime Minister Tony Blair is expected to be among guests attending a Champagne reception for Saint Hill & Von Basedow, which will present its spring collection and a retrospective of its work at the British Ambassador’s residence in Paris on Tuesday. The nine-year-old brand, which bills itself as the last remaining British couture house, has just moved its headquarters from London to Paris. Designers Britta Von Basedow and Saint-Hill, who is said to have been one of the favorite tailors of the late Princess Diana, said they wanted to be closer to their artisan suppliers.