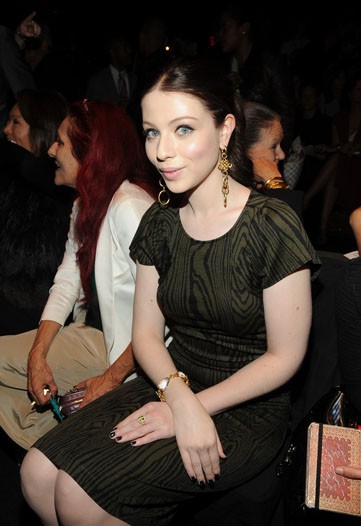 GOSSIP, GIRL: Michelle Trachtenberg has inked a deal to lend a design hand to Coach, WWD has learned. Trachtenberg will apply her tough-girl meets sugary-sweet vibe to her first jewelry collection in collaboration with Coach under the accessories giant’s youthful and spirited Poppy line. The costume jewelry line, which hits stores in the spring, will be rife with colorful crystals in addition to faux pearls and intricate hardware.

FASHION SCOUT: Celebrating her 21st year as a supermodel and hoping to continue on in this role “as long as possible,” Claudia Schiffer nonetheless said she’s ready to enter a new phase with the creation of a fashion collection under her own name. “I’ve been in this business for so long and developed my name globally, but I have no product to show for it. And I would love to develop it now,” she said at the IHT TechnoLuxury conference in Berlin on Tuesday. There’s no specific deal in the works, but her dream scenario would be to have an investor, fashion house and small design team all under one umbrella. “I have no definite first product in mind, but I would love to do cashmere. It’s something I wear all the time myself, but I’d love to do something a bit more price-friendly. Plus a lot of cashmere lines are very classic and timeless, while I’d want to do it a bit more fashion. Or I could imagine doing handbags.”

WIN A DATE WITH BILL CLINTON: Recently recovered from a bout of the flu and an E.coli bacteria infection, Sir Elton John on Monday night hosted former President Bill Clinton, Mayor Michael Bloomberg, Sharon Stone, Daniel Craig, Lily Safra and Evelyn and Leonard Lauder, among others, at the eighth annual benefit for the Elton John AIDS Foundation. Clinton was honored and captivated the black-tie clad crowd at Cipriani Wall Street as he spoke about the work that needs to be done, particularly in developing countries, to fight HIV/AIDS. As the 42nd president accepted his award, he also teased John, “That’s a really beautiful award. You won’t be offended if I say you’re beautiful, will you?” The Lauders were also honored, with Evelyn, in Zac Posen, noting that tens of millions have been raised for the MAC AIDS Fund. David Furnish said a holiday candle will soon be available for purchase at Macy’s, with the majority of the proceeds going to the foundation.

And then Courtney Love arrived. Spotted smoking in the bathroom, she later told WWD she was supposed to wear Givenchy but her daughter, Frances Bean Cobain, “was not having it,” so she went to Bergdorf Goodman a few hours beforehand and found a new black gown, from CD Greene. Love, who has been living in TriBeCa at Natalia Vodianova and Justin Portman’s place, plans to move soon to the West Village. She put in losing bids during the live auction for a day with Clinton (which went for $300,000) and polo player/Ralph Lauren model Nacho Figueras ($45,000). The auction packages ended up raising $640,000 for the foundation.

FUNNY PEOPLE: Comic relief came to Madison Avenue on Tuesday when Barneys New York unveiled its “Saturday Night Live”-themed holiday windows. A slew of “SNL” actors turned up at the party that night, along with the patriarch of the long-running show, Lorne Michaels, who said he expects to be at SNL “for a considerable length of time.” Rachel Dratch observed her Debbie Downer ornament in one of the windows. “It’s pretty cool,” said Dratch. “I’m glad to be a part of it even if I have a huge papier-mâché head. I heard that to be a celebrity you have to have a swell head.” Tina Fey came straight from her “30 Rock” rehearsal wearing a quilted vest and Uggs and worrying she was underdressed. “She braved the fashion emporium of Barneys, but actually looked quite chic and sportif,” said Barneys creative director Simon Doonan. Fey, who impersonated Sarah Palin on SNL, was a bit unnerved when the papier-mâché Palin hanging in the window started spinning around uncontrollably. It was as if the ornament suddenly went rogue.

BOHO CHIC: Douglas Hannant is partnering with Vivre’s Eva Jeanbart-Lorenzotti on a jewelry collection for the resort season, hitting vivre.com and the Douglas Hannant boutique at the Plaza Hotel in December. The line retails from $275 to $1,295 and includes bib necklaces, earrings and cuffs that feature colorful, semiprecious stones with gold detailing. The collection was produced by Sequin. “I was inspired by a rich, bohemian feel,” Hannant said. “When Eva and I had our first meeting, we had the same idea before even discussing it — gypsy style.”

JACK WILLS SAYS ‘BRAVO’: Rose Marie Bravo has joined the board of Jack Wills, the young and preppy British fashion retailer, as a non-executive director. The company, founded in Devon, England, in 1999, has more than 30 stores in the U.K. The label, often considered Britain’s answer to Abercrombie & Fitch, has no brick-and-mortar stores in the U.S., but operates the U.S. Web site jackwills.com. Meanwhile, Belinda Earl, chief executive officer of Jaeger and Aquascutum, has been named a non-executive chairman of AlexandAlexa.com, a London-based online designer children’s wear retailer. Alex Theophanous, the company’s ceo, said he plans to explore the possibility of setting up separate sites in countries such as the U.S. and Australia, which are among the company’s most significant markets outside the U.K.

BARTLETT GOING ROGUE: John Bartlett has partnered with Alex Carleton of Rogues Gallery on an exclusive collaboration called Rogues Gallery/John Bartlett (RG/JB), which will launch in December at the John Bartlett store in Greenwich Village. Bartlett has been focused on his signature brand since Claiborne let him go amid its repositioning as a J.C. Penney brand. Rogues Gallery is best known for its dark take on New England maritime culture and regional history, combining antique references and contemporary apparel. The collaboration will include Rogues Gallery’s signature vintage Ts, a distressed pique polo shirt, an overdyed black union suit and New England-inspired accessories. There will be a line of leather goods, including a handcrafted black leather gym bag, a leather log carrier and an assortment of bankers’ envelopes. As previously reported, Carleton is also collaborating with L.L. Bean.

NEW YORK OR BUST: Sisters Samantha and Justine Roddick have found a home for the first Coco de Mer store in New York. The company, known for its luxurious erotica, will bow at 236 Elizabeth Street on Dec. 8. Lingerie from Stella McCartney, Lascivious, Fleur T and Coco de Mer’s signature label will be among the offerings, as well as Betony Vernon jewelry that doubles as massage rings.

As is the case with the brand’s London and Los Angeles stores, dressing rooms will have confessional style doors that allow for an admirer to peer in. The New York store will also provide a 24-hour delivery service. The Roddicks, whose mother Anita started The Body Shop, started Coco de Mer eight years ago. Samantha Roddick considers her brand to serve a specific purpose. “Understanding pleasure and learning the art of loving makes each one of us a better person,” she said.