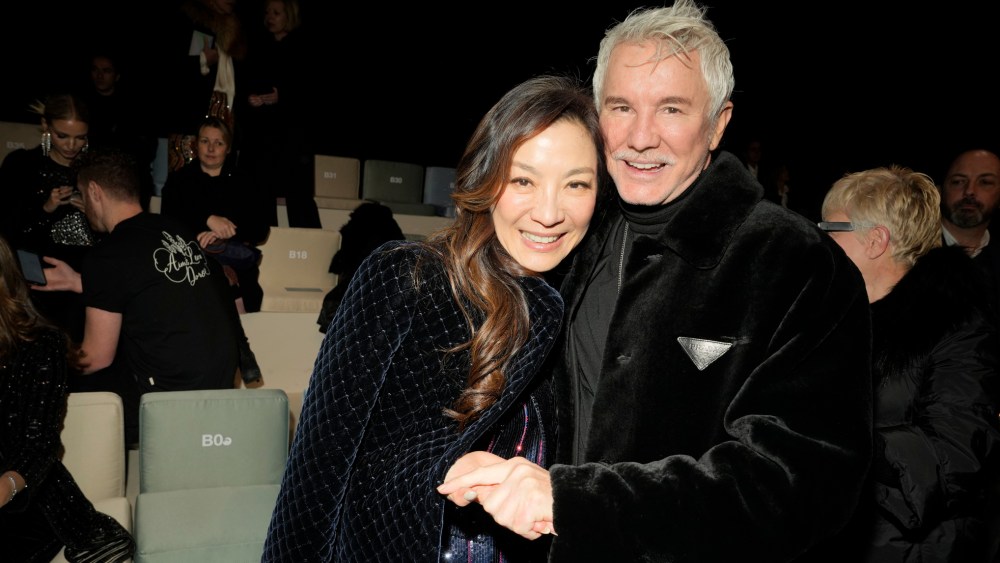 Giorgio Armani was the draw, but a little gold statue named Oscar was the man of the hour.

The buzz in the front row of the Armani Privé show Tuesday night was about the morning’s Oscar nominations, with “Everything Everywhere All at Once” star Michelle Yeoh, “Elvis” director Baz Luhrmann and costume designer Catherine Martin among the guests.

Yeoh received an Oscar nomination for best actress and her film received 11 in total, while Luhrmann got a nod for best director, Martin for best costume designer and the biopic scored a total of eight nominations.

“There was a little bit of screaming, we did a little dance,” Luhrmann said. “I think he fainted,” he joked about star Austin Butler, who also received a best actor nomination back in Los Angeles.

Luhrmann said it was an early present for Martin’s birthday and their 25th wedding anniversary, both of which will be celebrated on Thursday.

“It’s just really great because we’re a team. We’re very collaborative. And it’s just such a great win for that,” Martin said. The pair congratulated Yeoh and the group hugged and took photos together.

Yeoh, a haute couture regular, had spoken to WWD last year when she wrapped the film. “Actually even I’ve done the movie and I’m wondering what it’s all about,” she said at the time, calling the directors Daniel Kwan and Daniel Scheinert “evil geniuses” for their multidimensional storytelling. A year later, it had special significance.

“You imagine we’ve been promoting the movie for over a year. But you know, when you have something so precious and something that people can relate and resonate so much with them, it’s so precious,” she said.

“Emily in Paris”‘ actor Lucas Bravo revealed he is about to announce his first leading role, but couldn’t share any details. It will be a big step for the star who shot to fame as a love interest for the main character.

Despite three seasons on the Netflix hit, he joked that it hasn’t rubbed off on his personal life. “I’m still trying to find out what my style is in terms of, you know, stepping outside of my apartment,” he said, adding that he appreciates Armani for his classic, timeless style.

Juliette Binoche made the front row as well, alongside a cold Carla Bruni who had to curl up in a security guard’s coat inside the chilly venue. If stylist Law Roach had his eye on some dresses it was hard to guess, as he remained mysterious behind sunglasses.

Binoche talked about the costumes for her upcoming role as Coco Chanel in Apple TV’s “The New Look.”

“What you’re choosing has to be related to the inside, so it’s never to put something that looks good for yourself but that tells the story,” she said.