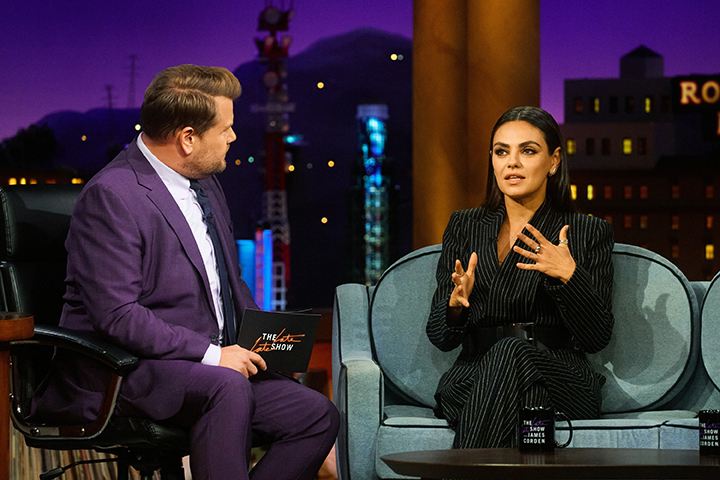 Mila Kunis appeared on “The Late Late Show with James Corden” on Tuesday in a businesswear-inspired look.

The actress appeared on Corden’s show in a pin-striped flannel scarf blazer and matching trousers from Michael Kors Collection’s fall 2022 line. She belted the asymmetric blazer at the waist with a statement belt.

Kunis also wore a pair of pointy black pumps and accessorized with small jewelry accents, including rings, a pair of diamond earrings and a small gold chain with several diamonds.

Her makeup included a hint of blush, a coral lip and eye-popping mascara and eyeliner.

Kunis promoted her new movie, “Luckiest Girl Alive.” The film stars Kunis as a writer with the “perfect New York City life,” which comes undone when a true-crime documentary forces her to confront her high school past and teenage years. Kunis stars alongside Chiara Aurelia, Finn Wittrock and Jennifer Beals.

In addition to her latest movie, Kunis is also one of the most recent investors in fashion brand Autumn Adeigbo alongside Cameron Diaz and Gabrielle Union. The support from the actors helped bring the brand’s total funding to $4.2 million. The label includes dresses in bright colors and statement accessories. Last fall, Adeigbo received an invitation to join the Council of Fashion Designers of America.

Kunis also announced that she will have a guest appearance on the “That ‘70s Show” spinoff “That ‘90s Show.”