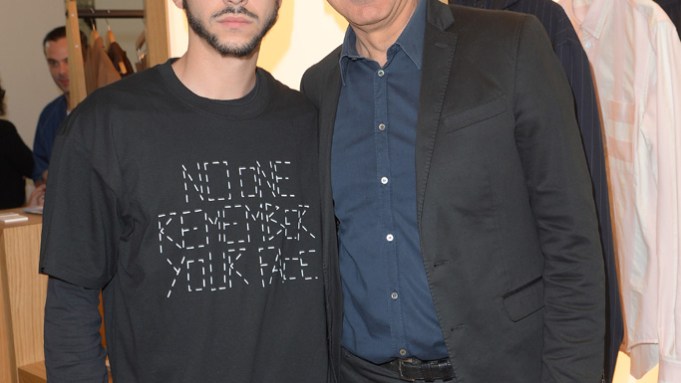 During the presentation at the Camera della Moda breakfast on Sunday morning, Chin Yu Wang, the Taipei-based designer of Chin Mens, said he wanted to bring “femininity and sexiness” to his collection. The Central Saint Martins graduate said his inspiration was: “The story of two guys who are friends, and the flintiness between them.”

To wit: There was a long, sheer trench, as fine as a negligee, and a short jacket done in a gold-green tone-on-tone camouflage jacquard with a subtle shine. A navy blazer had a flared bottom and a nipped waist, while halter-like tops had sashes that wrapped at the waist. There was a big focus on tailoring, and the collection managed to steer clear of camp.

The label Omar worked in a similar vein, showing looks for both men and women – many of the interchangeable. The 32 pieces on show during the collective presentation at 34 Via Bergognone took their cue from workwear, with jackets and dresses done in heavy cotton — some with buckle details — and oversize jersey T-shirts. The palette was restricted to orange, black and white.

The Chinese designer Wan Hung, another Central Saint Martins graduate, also showed off an androgynous collection with colors inspired by one of his paintings. He worked a palette of dark blue, saffron and azure into long tops — some with collars, others oversize T-shirts — layering them over narrow, cropped trousers. There were also boxy suit jackets, some with brightly colored pebble beading, and transparent raincoats that said Hainan across the back, a shout-out to his native island, known as the Hawaii of China.

Matteo Lamandini put a fresh spin on traditional tailored clothing, working a black pinstripe fabric into an anorak and dark denim into a blazer. “I like to use fabrics in an ironic way,” said the designer, who was wearing a black T-shirt with white words that read: “No One Remembers Your Face.” “I’m a young designer, and the message is true.” Other looks included easy, deconstructed pinstripe or linen suits with patch pockets, layered over T-shirts. A white denim shirt featured the image of a buzz-cut blonde model, his neck adorned with shiny purple studs — with his back to the camera.

In the space adjacent to Men’s Hub, although not part of the collective, designer Vittorio Branchizio showed a lineup of sweatshirts and bombers done using fine-gauge knits. Some were ribbed, with thick nylon grosgrain ribbons running down the side, while a bomber was made from an ultralight knit with a blistered surface. T-shirts, like the one the designer was wearing, had abstract kaleidoscopic prints.

Like the other collections that showed nearby, these were clothes that straddled the sexes, a big theme that’s been developing over the spring 2017 men’s season.