Milan Design Week Kicks Off With Host of Cocktails

Hogan Rebel threw a party at its showroom on Monday night, while T Magazine feted its new design issue at the prestigious Villa Necchi Campiglio. 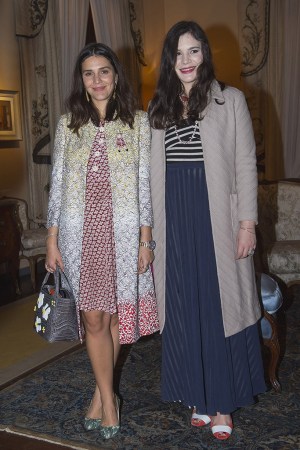 ALL ABOUT DESIGN: Beginning Milan Design Week, on Monday night Hogan Rebel, the Italian shoe brand’s sporty and younger line, hosted a cocktail party at its showroom on Via Savona to celebrate the launch of “The Rebel Journey. Dream, Believe and Create,” a book hitting stores this month. Published by Electa, the book consists of three volumes collecting the profiles of some of the most iconic men and women of both past and present who are considered rebels. These span from James Dean and Jack Kerouac to Steve Jobs, Mark Zuckerberg, Lou Dillon and Nacho Carbonell.

“We all have a rebellious side,” said Hogan president Andrea Della Valle, who noted that Hogan Rebel, which currently accounts for 20 percent of the label’s total business, continues to grow, especially in the Far East and Europe. “Being a rebel means being young, creative, nonconformist, but always with rationality.”

American hat maker Nick Fouquet, one of today’s rebels included in the book, attended the event. “I’ve always been a rebel,” said the globetrotting designer, who recently came to the fore by creating the headpieces worn by Madonna and Pharrell Williams at the Grammy Awards in January. “I’m going to open a concept store in Venice Beach next month — I’ll sell the things that I like: works by artists, my hats and pieces from other brands,” he revealed.

Meanwhile, at the prestigious Villa Necchi Campiglio, a mixed crowd of guests from the fashion and design industries joined T Magazine’s editor-in-chief Deborah Needleman to celebrate the publication’s new design issue. “It’s always so amazing to be here with such super collaborative, happy and creative people,” said Needleman, who said she was leaving on Wednesday to go back to New York to close the magazine’s next issue. “I’m so sad to miss Rossana Orlandi’s party — I’m sure it will be fun,” she admitted.

For the event, Needleman tapped Brooklyn-based artist Derrick Adams to create videos projected both on the façade and on an inside wall of Villa Necchi.

“I wasn’t sure of the result until last night, when we waited for the sun to go down and test the videos,” said Adams. “The idea was to create an interaction among the videos, the history of the house and the space.”

“For the first time, this year we are at the fair with a Diesel Living booth, where we present all the home pieces realized in collaboration with our licensing companies, including Scavolini, Foscarini and Moroso,” said Rosso, creative director responsible for all of Diesel’s licenses. “We also realized a new logo for Diesel Living – we put a roof on our iconic Diesel red and white logo.”

Away from the crowd, sitting by the swimming pool, were Kean Etro and his wife Constanza, who easily chatted about family, friends and work. “Constanza is working on a big project for September — we are in the mood to challenge ourselves,” Etro said cryptically.