Giorgio Armani: No Successor ‘On the Horizon’

The designer talks about his new autobiographical book.

By Miles Socha and Luisa Zargani on September 28, 2015
View Slideshow 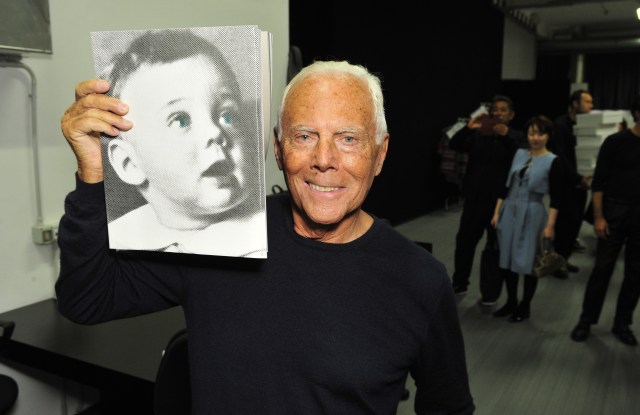 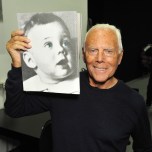 MILAN — As a young man, Giorgio Armani saw a shirt —  in a gingham print — in a movie that caught his fancy. He went hunting for it in several shops, and could not find it. Sales clerks asked him incredulously: “But checks are for tablecloths in trattorias. Why would you want to look like a tablecloth?”

It was at that moment that Armani realized he could do something in fashion.

The designer recounted that story at a press conference Monday to introduce his Rizzoli tome, “Giorgio Armani,” released as part of his 40th anniversary festivities. With Sophia Loren, Lapo Elkann, Robert Wilson and the international press before him, Armani was asked if, given his age of 81, he had identified the designer who would succeed him.

The designer replied that his “ego forced him to say there will never be anyone else like Giorgio Armani,” prompting a round of applause and a few cheers from the audience. Then he added that he did not see anyone in particular “on the horizon,” while acknowledging that “there is a movement [of designers] that have the will to be avant-garde.”

Asked if he considered himself a revolutionary in fashion, Armani enumerated three of his inventions that changed the rules: “Wearing an evening gown with flats; adding comfort to men’s jackets, and showing women how they could dress like men while maintaining their femininity.”

Ahead of his show, Armani defined the tome “not so much an autobiography, but rather a way to motivate, explain and accompany the images and my work. An autobiography is something else — it engages people [who] have been close to you in the past. It’s very delicate.” The designer hinted at a more comprehensive autobiography he is working on “slowly, step-by-step and very secret.”

Wilson, who designed Armani’s Guggenheim exhibition and directed his 1996 presentation at Pitti Uomo, hinted he had another “big” project brewing with the designer.

In the meantime, he’s involved in a slew of operas in Italy, and revealed that he would direct an opera about Nikola Tesla starting in November, with actress Tilda Swinton portraying the Serbian-American inventor.