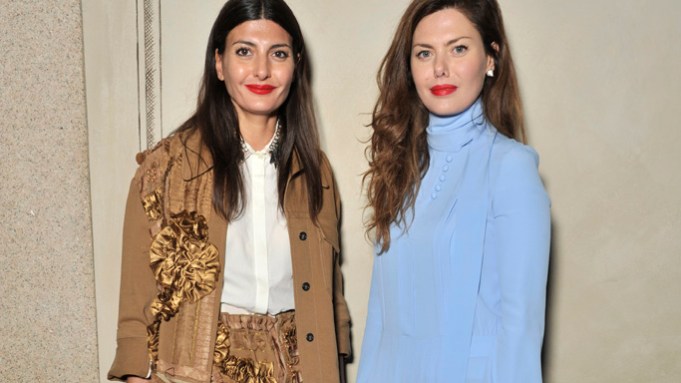 An array of personalities from the fashion industry flocked to Milan’s Palazzo Morando on Wednesday night to attend the seasonal cocktail hosted by Vogue Italia and Yoox.com to celebrate the opening of “The Next Talents” talent scout initiative.

For the first time, “The Next Talents” showcased a men’s wear label. “I’m the first men’s designer to present here at Palazzo Morando,” said Luca Larenza, who unveiled a collection that included a range of color-blocked polo shirts as well as intarsia knitwear in a sophisticated color palette of dégradé tones.

Knits are on the radar of Andrea Pompilio, as well. “I’m just back from Ferrara, which is such a beautiful city, where there is the factory producing the knitwear pieces for my brand,” said the designer, who is about to take a trip to Japan.

Taking a break from the preparations for his presentation, scheduled for Friday, Andrea Incontri revealed that for fall he created a new accessories collection called “Luck Bag,” which includes bags featuring a closure coming in the shape of a four-leaf clover. “This is also appearing on a capsule collection of mini and long silk jacquard dresses,” Incontri said.