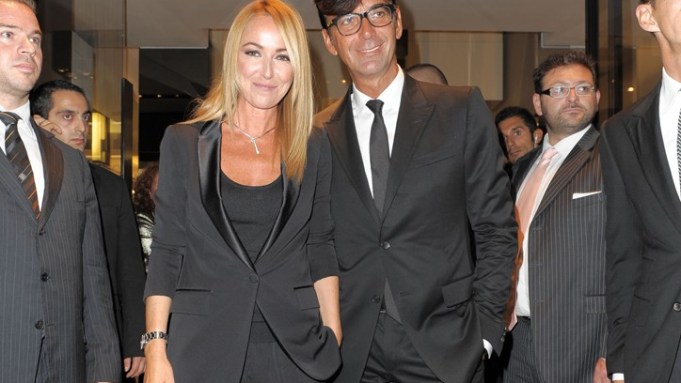 Designers were the celebrities of Milan’s Fashion’s Night Out, drawing rock-star-worthy crowds and stopping traffic, including Diesel’s Renzo Rosso, whose limo came to a complete halt in Via Montenapoleone. “I’ve just seen two fellow designers on the street who never even say hi, but they did for the first time tonight — with a smile — and this made them look more beautiful,” said the ever-candid Roberto Cavalli, crammed between TV crews and curious onlookers at his store. “Yes, it’s all worth it, even just to see all the excitement and people having fun.”

“I’m not regularly recognized when I walk through Via Montenapoleone, but it’s different tonight: People are looking for contact and they look happier than usual,” concurred Frida Giannini.

However, FNO is about shopping after all, and Giorgio Armani opened up about his buying habits. “I’m spontaneous and impulsive,” said the designer, admitting he’s more prone to shop when traveling, especially to Paris, London or New York. Donatella Versace was more specific about her favorite shopping splurges, which include jewels and homeware, revealing she still subscribes to the old-fashion method of “touching and feeling,” and that online is not her thing.

Like mother, like daughter: Rosita and Angela Missoni just discovered they bought the same exact armchairs without realizing it. “I bought mine at a flea market, while Angela ordered hers on eBay,” said Rosita Missoni. Likewise, e-commerce was top of mind for Gildo Zegna, who revealed that Z by Zegna launched an “online appetizer” this week on thecorner.com to test e-tailing. Zegna also revealed he’s a part-time mystery shopper. “I like to visit our stores and check the service anonymously,” he laughed between soccer pals that included Juventus president Andrea Agnelli and England manager Fabio Capello.

Speaking of sports, Dean Caten of Dsquared was on the bench, nursing a broken leg. “It happened in Mykonos,” he said, coyly declining to add details. His twin brother Dan started discussing how Dean will opt to take his fashion week bow on crutches. “I’ll just do a Miuccia [Prada],” Dean quipped, mimicking the designer’s signature peekaboo.