Nurturing the next generation of fashion talents is key to the Italian chamber of fashion, which for the fifth year kicked off Milan Fashion Week Men’s with its Milano Moda Graduate event.

Conceived as a celebration of free creativity and a chance to give credit and visibility to young designers, the runway show featured collections from eight students selected from a range of Italian fashion schools including IED, Istituto Marangoni, NABA and IUAD, Accademia Della Moda, among others.

“The CNMI [Camera Nazionale Moda Italiana] Fashion Trust is involved in really supporting these talents and this event marks the official kickoff of the Men’s Fashion Week. I’m proud because one of our pillars is to nurture these young designers and be committed to sustain education,” said Carlo Capasa, chairman of the fashion association.

Francesco Murano of Milan’s IED scooped up the CNMI Fashion Design Prize for best collection. The trust, a nonprofit entity established last year and supported by a group of philanthropists, entrepreneurs and investors, which helps young talents, backed the winner with a 10,000 euros monetary award.

“We’ve seen unique fashion pieces and talented, skilled young designers, the overall level was very high, which made it hard for us to make a choice,” noted Angela Missoni, who helmed the jury.

Murano presented a feminine and strong collection of minidresses and suits crafted from a range of fabrics, including crepe, silk and wool. Some frocks had ruched and folded panels hanging from the skirts, while tailoring featured pointy shoulders, a recurring element of the collection, exuding an Eighties vibe. The lineup done in a somber color palette of grays, white and dusty tones was accessorized with  heeled leather pumps laid on a square-shaped sole to create a geometrical contrast. 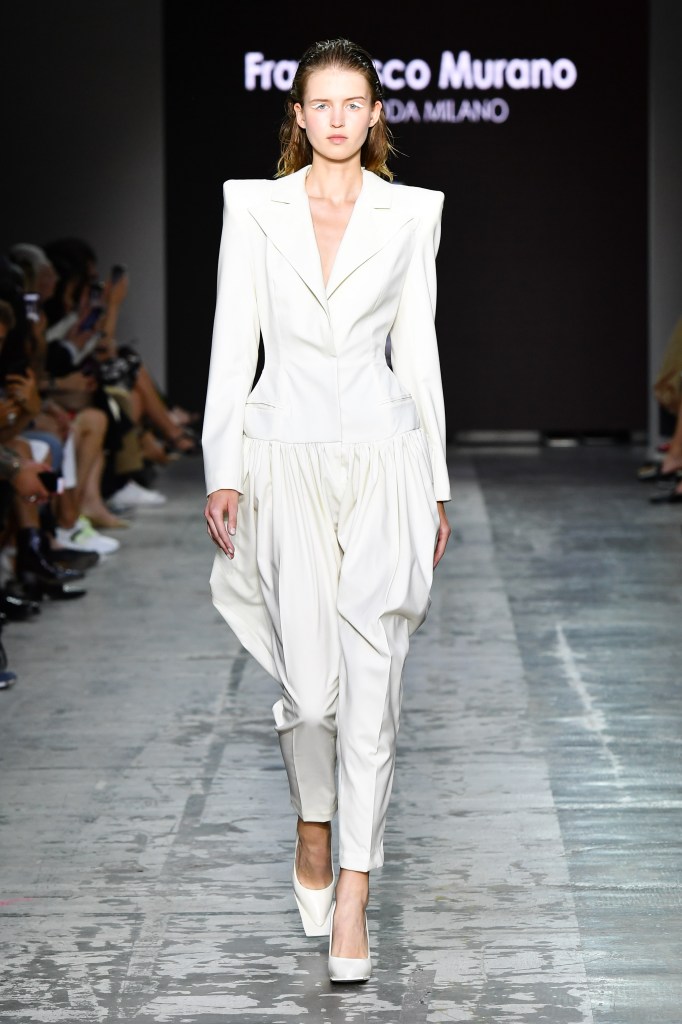 The eight designers competing for the prize were also given the chance to attend educational programs and experiences developed with the support of the Italian chamber of fashion and CNMI Fashion Trust’s partners, including Giorgio Armani, who opened his haute couture atelier to the students; Ermenegildo Zegna; textile firm Albini Group; zipper manufacturer YKK and Facebook Italy, among others.

“Our aim is to support talents working in Italy by helping them merge creativity with a tangible business opportunity,” said Umberta Gnutti Beretta, a founding member of the trust. “Made in Italy deserves to be supported,” she said.

Other winners included NABA’s John Lloyd Palomares, who received the YKK Italia prize handed by the company’s president Hitoshi Yamaguchi. The student will be offered the opportunity to attend a seminar at YKK’s Japanese headquarters.

The sixth edition of Milano Moda Graduate is scheduled take place in June 2020.