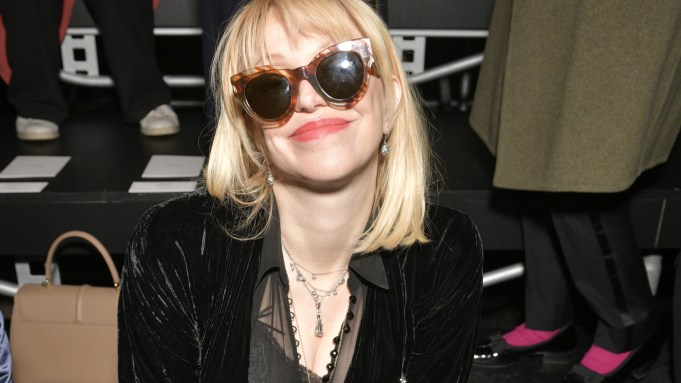 IT’S A WRAP: For the exhilarating wrap of Paris Men’s Fashion Week, Courtney Love, Virgil Abloh, Joséphine de La Baume, Carl Barât and Romain Duris were among the guests attending the first men’s show for Celine, under its new creative director Hedi Slimane. The event was held in a black ephemeral structure set on the Place de la Concorde.

“It’s an historic moment,” said Miles Kane, who had just landed from London. “I did my first fashion shoot with [Slimane] when I was about 20. That opened the doors for me in this mad world,” added the British singer, taking in the picture-postcard views, a tourist’s dream encompassing the Luxor Obelisk with, beyond it, the Avenue des Champs-Élysées and Arc de Triomphe, and to the left, the Eiffel Tower.

Dressed in a patterned shirt from the collection, Kane described Slimane as being “a lovely guy.”

“Whenever I put on a jacket or a shirt like I’m wearing now, it makes me want to go and have it,” he said. “It’s like putting a banging Motown song on.”

For 17-year-old Lucas Portman, it was his first show by Slimane. His mother, Natalia Vodianova, flanked by her partner Antoine Arnault and the Arnault clan, said she felt super proud.

“But I’m proud of him every day, he’s a good student and a really nice boy,” she added. “He likes fashion a lot but, luckily, he’s more interested in finance and his studies at the moment.”

Husky-voiced, twentysomething, rising French actor Anthony Bajon, who is filming the Jeanne Balibar-directed “Merveilles à Montfermeil,” is also a major fan of the designer. “I love his skinny ties,” he enthused, taking to his seat as a giant round light sculpture suspended above the runway, built from metal tubes and strobes, suddenly lit up red.

Heading to greet Slimane after the event, which included a piercing sax solo for the finale by James Chance, a starry-eyed Abloh, who presented his sophomore effort for Louis Vuitton men’s on Thursday, gave his verdict: “It was exceptional.”

Love, too, was buzzing. “It was so cool, it reminded me of 1982 Liverpool, it was fabulous,“ the singer backstage said. “The choreography blew my mind. And the hair, I loved the hair, it’s part of my life. Short back and sides. And lots of gingers, I thought that was fantastic.”