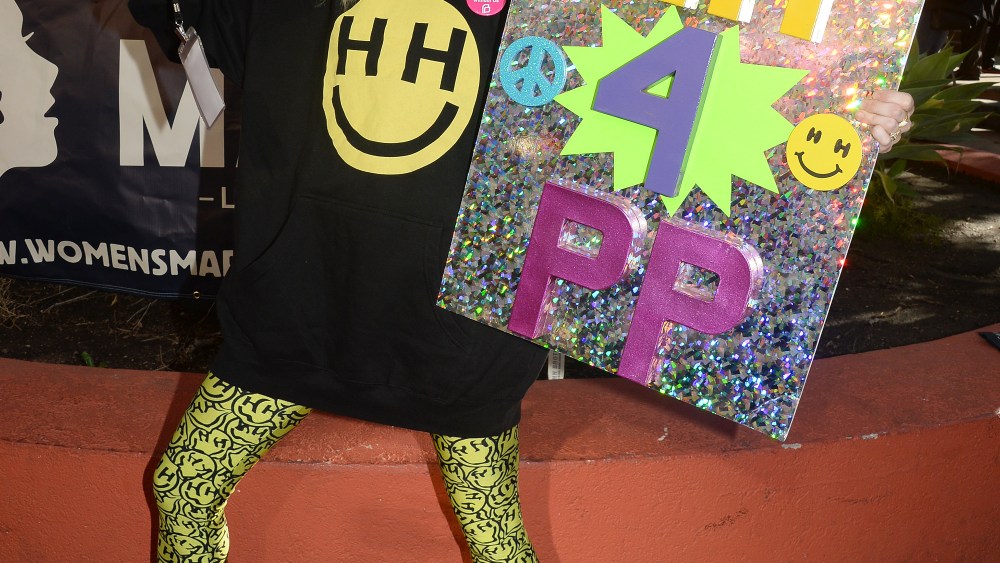 While various versions of the Women’s March took place in more than 60 countries around the world, Los Angeles gave its own twist as the nexus of Hollywood, fashion and progressive politics.

Miley Cyrus merged her dedication to the Happy Hippie Foundation and Planned Parenthood with a hologram poster that reflected her HH-logoed sunglasses and leggings. Ke$ha marched for animal rights. Jamie Lee Curtis showed solidarity with Jane Fonda by standing next to the Oscar winner with a sign that read: “What she said.” Vanessa Hudgens brought along her younger sister, Stella, while Natalie Portman came with her baby bump and a heart-shaped balloon alongside her husband, Benjamin Millepied.

Before the march started Saturday morning, attendance was expected to reach almost 100,000. Organizers pegged the actual number at 750,000. Under a squadron of buzzing helicopters, the dense but peaceful wave of people moved from Pershing Square to City Hall, inching by landmarks such as Angels Flight and Grand Central Market.

Mayor Eric Garcetti assured those who questioned which rights Trump would revoke that they shouldn’t be afraid. “It doesn’t matter who’s in office. It matters what we do,” he told the crowd assembled in front of City Hall. “And tomorrow we act.”

For those working in the fashion industry, they acted with fabric, scissors and thread. A Los Angeles-based patternmaker for Bernhard Willhelm, Julia Santilli fashioned jewel-toned bunny outfits and matching ears for herself and her friends, Caitlin Thornton, Rachael Roth and Ryan Rosewall, who all donned them under black leather biker jackets. “It goes back to Gloria Steinem,” Thornton said, referring to the groundbreaking reporting the feminist did when she went undercover at the Playboy Club. Acknowledging the complicated politics surrounding Trump, she added, “We seriously considered not coming and we thought of the Sixties and Twenties when we would have been involved in the movement.”

Aside from bunny ears, pussy cat paraphernalia was prevalent. Mandy Moore topped her brunette locks with a pink hat knitted with cat ears, which has become the sartorial symbol of the women’s marches around the world. Ribbing Melania Trump and the Gucci pussy bow blouse she wore at one of the debates, Fame and Partners handed out pink bows to protesters.

The city’s fashion crowd used their creativity for signs. Andia Bayandor from Hudson Jeans made a red, white and blue one that cited Michelle Obama’s popular tagline on Hillary Clinton’s campaign trail: “When they go low, we go high.”

To raise money for Planned Parenthood, Other Wild went on the custom clothing site Print All Over Me to make sweatshirts adorned with the phrase “the future is female” and a border of female symbols.

Dean Heezen made the ultimate style statement. The 26-year-old Canadian, who works in the entertainment industry, traversed the streets in size 11 1/2 red stilettos and a placard stating, “Walk a mile in her shoes.”

“I just felt like there’s a lack of empathy that stops a lot of people from uniting with another person and seeing and understanding their rights,” he said.