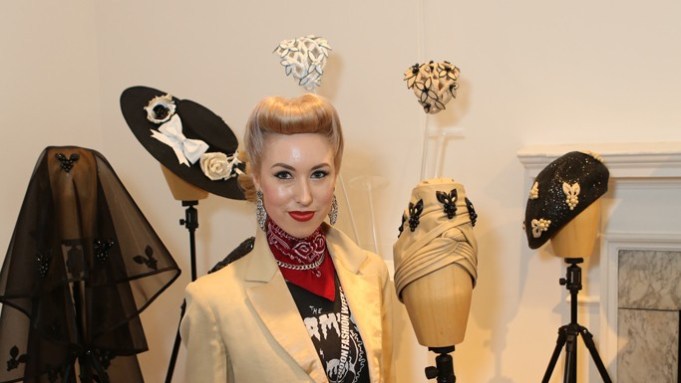 HEAD FIRST: What’s the best yardstick for finding a fabulous hat? According to British millinery stalwart Stephen Jones, “Ask, ‘Does it make you feel how you want to feel?’ rather than, ‘Does it suit you?’ — it’s all about the dream.”

Jones has curated the British Fashion Council’s Headonism initiative, which, with the support of Royal Ascot, celebrates Britain’s emerging millinery talent. Returning for the fall 2013 season are Piers Atkinson and William Chambers, along with newcomers Aurora, Emma Yeo and Moody & Farrell.

Jones, whose “Millinery in Motion” exhibition at the V&A Museum proved the genesis of the initiative some five seasons ago, praised the new crop for their “extraordinary individuality, craftsmanship, point of view, belief in what do — and great hats.”

Special mention goes to Yeo, whose collection crafted from slivers of laser-cut Wenge wood was inspired by moths around a flame. “They have a fragility and power to them in a similar way to the work of McQueen,” Jones enthused.

Yeo started out as Atkinson’s assistant, for whom a stand out look was a laser-cut headpiece in etched Perspex inspired by the illustrations of Alphonse Mucha. “We cut it up like a jigsaw puzzle and then glued it all back together. It nearly killed me,” Atkinson recalled.

“Hats are such a part of catwalk shows now,” Jones mused. “Five or 10 years ago they were treated as the runt of the fashion cupboard.”