The designer installed a specially designed bouncy castle in the Mayfair gallery to showcase her latest collection. 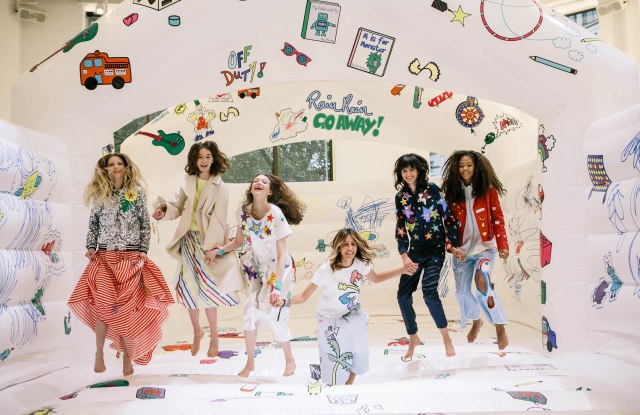 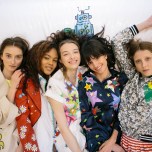 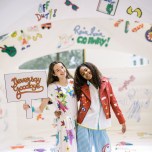 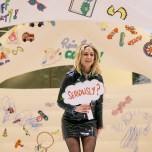 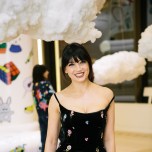 CHILD’S PLAY: Mira Mikati, the Lebanese designer known for her bright and refreshingly optimistic aesthetic, brought her playful spirit to Phillips Gallery in London’s Mayfair earlier this week with a showcase that included a bouncy castle and foam clouds hanging from the ceiling, alongside her spring collection.

Mikati, who usually presents her collections during Paris Fashion Week, said she wanted to bring a taste of her world to London. The British capital is the brand’s third-largest market after the U.S. and Asia, and is home to some of the brand’s biggest supporters, including Sabine Getty, Eugenie Niarchos and Daisy Lowe, who attended the presentation at Phillips.

The bouncy castle was specially designed by Mikati, with drawings and scribbles inspired by her children. They ranged from a red London bus to playful “Rain, Rain Go Away” slogans and sketches of skateboards referencing the designer’s son’s hobby.

“Since I started my label, the idea has just been ‘be happy.’ I think people take themselves a little too seriously in fashion,” said the designer, whose spring collection reinvents the tale of Peter Pan.

Scribbles inspired by the Disney tale, from a sketch of a pirate to slogans such as “Teenage Runaway” or “Never Grow Up,” were printed all over leather jackets, oversize sweatshirts, and dresses or embroidered onto denim. Other highlights included feminine mididresses printed with metallic, colorful stars and a crocheted knitwear.

Models dressed in the collection jumped up and down on the castle, and were soon joined by guests eager to take a short break from adulthood – even for a few minutes.

Mikati also highlighted a series of collaborations with artists she has been working on since launching her label in 2015, including the illustrator Craig Redmont, known as Darcel Disappoints, who lent his one-eyed caricatures to Mikati’s clothing. Kaws (whose real name is Brian Donnelly) worked with the designer to create a capsule of color-blocked bomber jackets, while Jack Pierson also teamed with Mikati on the spring collection.

“Working with artists is an integral part of my brand and I aim to continue doing so every season. I learn a lot through collaboration as artists can be very specific about how they want something to look. The collaboration with Jack Pierson took us over a year,” said the designer, adding that Takashi Murakami is next on her wish list of collaborators.

In addition to the brand’s arty, irreverent spirit, Mikati ensures that she creates wearable silhouettes that can appeal to the consumer, and has quickly established a wide retail network that includes Liberty, Browns and Harrods in the U.K.; Colette in Paris, and Net-a-porter and Moda Operandi online.

Her previous experience as the founder of Beirut’s concept store Plum, which introduced designers such as Azzedine Alaia, Christopher Kane and Alexander Wang to the Lebanese capital, instilled a commercial sense in the designer.

“I studied fashion at school and when I was younger, I was just about making my wildest, most eccentric fashion dreams come true. After working on Plum, I realized that I still want to make my creative dream come true, but I want that dream to sell and started to think about a strategy, distribution and pricing.”