The designer and Elle Japan threw a bash to celebrate the model's cover of the December issue. 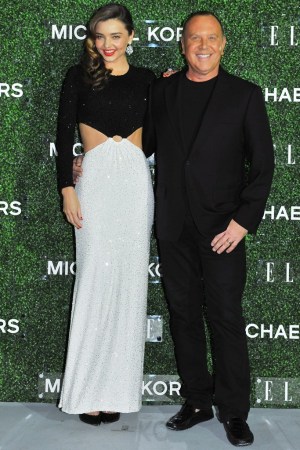 Elle readers, Kors fans and fashion editors gathered at the Tokyo National Museum in Ueno Park, located in the northeastern part of the city. Party guests raced to pose for souvenir snaps at stations equipped with motion-sensor cameras. Many of them were eager to show off the party favors of the evening: mini Selma bags in silver and white.

Perhaps part of the frenzy can be attributed to the brand’s popularity in Japan, where Kors said he has seen an increasingly varied group of women sporting his designs.

“Every time I come, you see a broader range of women, different ages, different types… now we see teenagers here wearing a handbag or then we see office girls, then we see moms with a stroller. So I think it’s just broadening our mix here in Japan. I keep seeing that happen,” he said.

Kerr, sporting a sparkly midriff-bearing dress in black and white, said this was just one of many trips she has been making to Japan recently. She sells her skincare line Kora Organics in the country and she is also working as a celebrity spokeswoman for Japanese handbag company Samantha Thavasa.

The model and beauty entrepreneur said she has plenty on her agenda for the foreseeable future. Her second book, “Empower Yourself,” which dispenses advice to young women and acts as a companion volume to her first volume “Treasure Yourself,” is coming out shortly. “And I’m already working on a third book,” she quipped.

Also noteworthy, the model let it slip that she has an upcoming fragrance project in the works but she was mum on the details. “You’ll find out,” she teased. “It’s a collaboration.”