At Catch L.A. to celebrate the model's new Mother denim collaboration, the Disney star and stylists dish on their dream design projects. 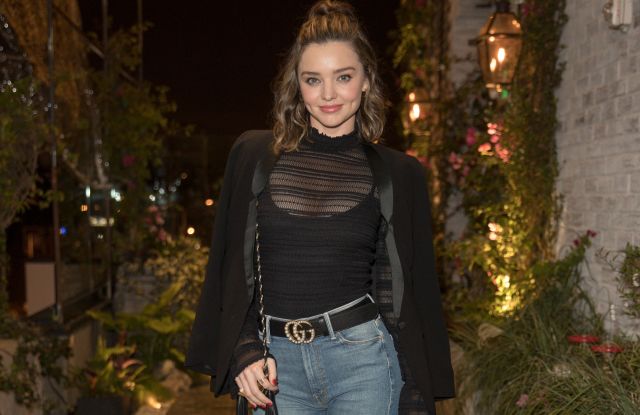 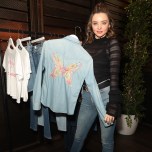 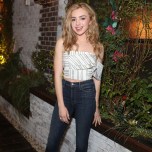 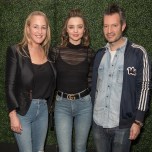 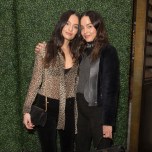 Her decision to stitch tiny tags printed with affirmative phrases such as “in joy” and “live for now” on the inside seams of cropped navy sweatshirts, butterfly-embroidered shirts and the rest of her denim collaboration with Los Angeles-based Mother is influencing not only customers to snap up the pieces but also her stylists, Chloe and Marie-Lou Bartoli, and Disney star Peyton List to contemplate on Wednesday night what they would do with their own fashion line.

“All the girls are constantly asking me,” said List, who has amassed more than 14 million followers on social media through her gigs on “Bunk’d,” “Jessie” and “Diary of a Wimpy Kid.” “You’re either dressing like a little girl or a woman.” What is missing is something in the middle for teenagers and young women, she observed as waiters passed spicy chicken tacos and artfully rolled sushi at Catch L.A. in West Hollywood to guests including Louise Roe and Jessica Paster. “You don’t need to show every part of your body,” she said. “I want to show off my curves but still stay classy.”

The high-waisted jeans from Kerr’s collection, which benefits Australia’s Royal Hospital for Women, fit that need. Calling the model “an icon of mine,” the 18-year-old said in awe, “I’ve grown and she’s not aged at all. She’s so perfect and beautiful.” As she makes her way through Hollywood, List loves fashion as a form of self-expression. “I just feel it’s a way of expressing yourself at the moment,” she said. “It’s for me and not anyone else. People say, ‘Guys like it when you dress down.’ I don’t give a beep about what guys like.”

All made in Los Angeles, the line would cost anywhere from $100 to $1,500. While Chloe Bartoli wanted to keep the rest of the details a secret, her sister revealed that they would sell it online and in stores.

Certainly the twins can swap tips with Kerr, who doesn’t hide how much she likes designing, whether it’s jeans, bags for Samantha Thavasa, her home in Malibu or the packaging for her natural skin-care brand, Kora Organics. She’s directing the rebranding for Kora to a “more elevated and refined” look, just in time to start selling it as the first certified organic line at Sephora in May.

“It’s a fun process to create,” she said, noting that she merged her two projects by wearing jeans from her Mother collection to a board meeting for Kora earlier that day. She said she could probably see herself giving up modeling to design full-time. “For me, the modeling has always been a means to an end,” she said. “It’s not something I ever aspired to do. It’s something I was like, OK, I’ll do that so it can be like a stepping stone to other things. And I can meet creative, interesting people, I can travel the world and now I’ve been able to develop my business, Kora Organics. That’s really my passion.”

Kerr was on a roll in making people feel good. As the party wound down, Paster swung by her booth to send her well wishes. “You’ve never looked better,” Kerr told her.

“But look at how fat my ass looks,” Paster said, turning around to show off her denim-clad backside.

“It’s hot,” Kerr said, before friends around them broke out in giggles.