Until now Yu Wenxia has had zero exposure to the luxury world, having grown up on a farm in the Heliongjiang province in northern China. 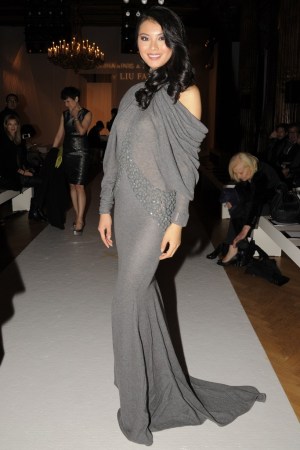 CHINA CLUB: Taking in her first fashion show front row at the presentation of cashmere specialist Liu Fang on Wednesday evening at the Westin Paris Hotel was the newly crowned Miss World, China’s Yu Wenxia. Until now Wenxia has had zero exposure to the luxury world, having grown up on a farm in the Heilongjiang province in northern China. She wore a long gray crystal-embellished cashmere dress with a draped neckline by Fang that exposed her shoulders.

“It’s beautiful in a unique way and so comfortable, which is very important for a dress,” said Wenxia.

Fang, who was the sole designer selected to show as part of the fifth China in Paris initiative, sent out a collection of sculptural cream-colored tops and dresses honed from panels of knitted cashmere draped around the body. Worn with gossamer knitted cream-hued tights, some of the looks had intricate origamilike manipulations or bands of folded knit that gave an organic, fossil-like 3-D relief to the garment.