The app’s core feature is the ability to “like” looks straight from the runway and then be notified when those looks are available for preorder. 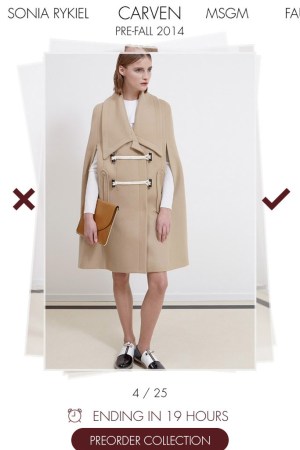 MODA’S NEW M.O.: Moda Operandi is going mobile. The New York-based e-commerce site is launching its first app today, available to download for free on the Apple iTunes store. The app’s core feature is the ability to “like” looks straight from the runway and then be notified when those looks are available for preorder.

“What makes it different from all of the editorial apps out there is that while a lot of them allow you to save or ‘like’ looks from the runway, we allow users to get those looks [as soon as they become available], instead of ‘liking’ looks and then having to search through retailers to find them six months later,” said Elizabeth Cordry, the company’s director of product.

Moda Operandi said that its mobile revenue has increased 149 percent on a year-over-year basis, and to date, one of its largest orders — totaling $90,000 — was placed on a mobile phone.