Executives are waiting to see the outcome of the showroom’s three-day run before considering similar experiences in other cities, a company spokeswoman said. 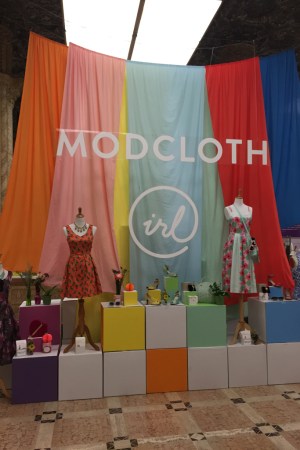 It’s the company’s first foray into brick-and-mortar since a New York pop-up two years ago. Executives are waiting to see the outcome of the showroom’s three-day run before considering similar experiences in other cities, a company spokeswoman said.

Some 5,000 people signed up for the event before ModCloth had to cap reservations. Customers who weren’t able to book a spot will be allowed to wait in line.

The showroom, located in the lobby of the company’s Los Angeles office—where some of its buying team works—allows customers to try on clothes in any of the 21 dressing rooms. They can then purchase items they liked on computer terminals set up on the showroom floor or through employees that will be walking the space with iPads.

An assortment of vintage items, sourced mostly from Los Angeles vendors, will be available for sale and replenished throughout the three-day run. Accessories, some of which are not available online, will also be available to buy on site.

This is one of the first major moves out of the e-tailer since chief executive officer Matthew Kaness, a former Urban Outfitters executive, took the reins in January. He succeeded cofounder Eric Koger in the position. Koger and his wife Susan, who remains chief creative officer, founded ModCloth in 2002.

The company has raised nearly $64 million in funding to date.