Goddard presented looks from past collections alongside her resort 2018 collection. 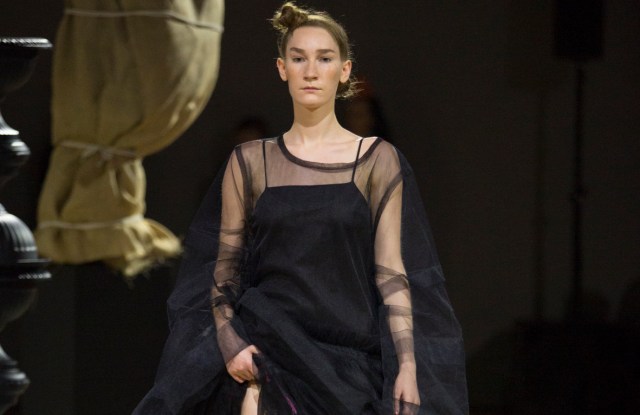 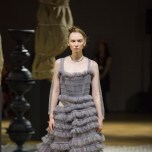 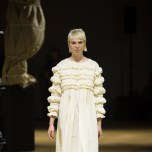 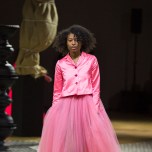 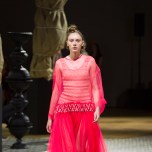 MOLLY’S WORLD: British designer Molly Goddard staged a show at the V&A’s newly opened Sainsbury Gallery — and took the opportunity to introduce pieces from her first pre-collection — as part of the museum’s ongoing Fashion in Motion series.

The range was more wearable than her fantastical main line, with its outsized proportions and sweeps of tulle. They also featured more pattern, from floral prints to tartan ones.

Goddard said the pre-collection was also inspired “by all the bit I love from the V&A’s collection, from embroidery to 17th-century underwear and a section on punk.”

It was the first show that Goddard hosted outside the official fashion week calendar. The Fashion in Motion series is for members of the public and the lines to enter Goddard’s show wound all the way around the museum.

“We made a lot of effort to make the show really special — it’s the biggest one we’ve ever done. It’s great not to have the pressure to produce things that are on-trend or seasonal,” said the designer, adding that she and her sister Alice had fun picking our their favorite designs.

She said their selection included some the “most ridiculous and unwearbale” pieces she has produced. They included a tiered electric blue tulle dress, and a mini version in neon green. A romantic gray piece was made of smocked tulle.

Goddard added a touch of her off-kilter, romantic aesthetic to the new space with a set she created with her mother, set designer Sarah Edwards. They took inspiration from objects they loved during their frequent trips to the museum. They re-created a bedroom scene, with a bed that was adorned with hand embroidered sheets, while on the other side, a big table was filled with breakfast treats and an array of antique ceramics.

“I wanted to bring the part of the museum I’ve always loved into the new space, which is quite different. A lot of handwork has gone into the sets, so it’s a crude version of objects in the V&A, which are much more precious,” said Goddard, whose work is also displayed as part of the V&A’s latest exhibition, “Balenciaga: Shaping Fashion.”

The models walked around the circular room, lounging on the bed. Some wore Goddard’s favorite pieces from dresses she created while studying design at Central Saint Martins to pieces from her fall show.