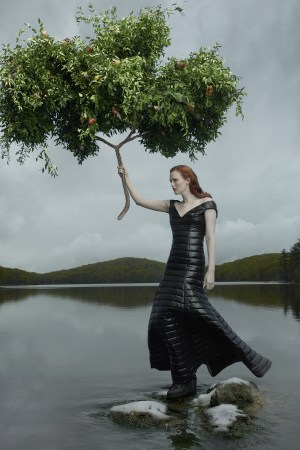 Moncler reenlisted the photographic services of Annie Leibovitz for its fall campaign, while working with two new faces for the brand: Karen Elson and James Jagger, the 30-year-old son of Mick Jagger and Jerry Hall who recently appeared in HBO’s “Vinyl.”

Titled “A Surrealist Fantasy,” the images draw on Nordic fairy tales and nature, including a most on-brand element: snow. One shot depicts Elson in a puffer gown perched on a rock in a river and holding a tree branch. On an even more surreal note, an image features Jagger seated in a room with a snow-dusted floor, draped in a red puffer cape with his face obscured by what looks like a caged set with a snowy tree.

The ads were photographed in upstate New York and this is the fourth time Moncler has used Leibovitz to shoot the company’s campaign. The ads will break in September fashion titles worldwide as well as online.